How much bigger and better is Art Basel Hong Kong?

Home/Notes Around the World/How much bigger and better is Art Basel Hong Kong?
Previous Next

How much bigger and better is Art Basel Hong Kong?

I spent four days visiting Art Basel Hong Kong in an area that occupied almost 35,000 square meter (115,000 square feet) of the Convention Center by the waterfront. It was impossible, of course, to see all the exhibitions from 245 participating galleries from 39 countries and territories and go to over 100 events happening concurringly all over the city. It was thrilling, wonderful. Busy. The second edition of Art Basel Hong Kong will surely exceed last year’s 60,000 visitors.

Unlike Art Basel Switzerland and Miami, 25 galleries are based or have offices in Hong Kong (5 galleries  in Basel and 2 in Miami). As Art Basel’s global director Marc Spiegler put it: “There is a much stronger local scene to engage with in Hong Kong compared to Basel or Miami.”

With ultra wealthy collectors flying in from neighboring China and all over the world, by the time the 4-day event opened on May 14th, several galleries had already sold their entire inventory of a particular artist. Pekin Fine Arts sold three of Wang Luyan’s large-scale sculptures to Chinese collectors. Trained as a mechanical engineer, his “Fire at Both ends” consisted of a handgun made by brushed stainless steel that measured over two meters (6.6 feet) long. “This is the best year we’ve had,” New York gallery owner Sean Kelly echoed the general sentiment at this year’s Art Basel. 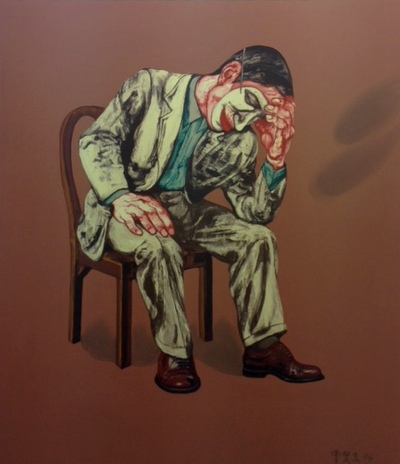 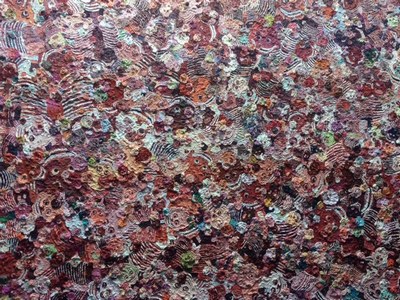 The array of works by over 3,000 renowned and new artists stood side by side. Zeng Fanzi is one of the most popular Chinese artists working today and his painting “Untitled” has his trademark of over-sized hands and raw, fleshy colors. In 2013, his oil painting titled “The Last Supper” was sold at a record-breaking US$23.3 million at Sotheby’s. Zhang Huan, considered as one of the most vital and provocative Chinese contemporary artists, showed colorful paintings of his “Spring Poppy Fields” series. Looking from afar, the thick pigment came alive with color and energy. At a closer inspection, faces and skulls appeared dotted all over the canvas. The optical illusion was mesmerizing. The theme alluded to Buddhist masks and iconography and was inspired by Zhang Huan’s travels to Tibet, Nepal, Bhutan and India. 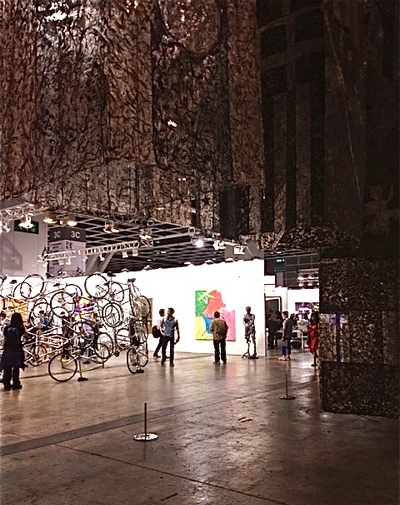 Large-scale installations and sculpture pieces were placed throughout the venue. Two Chinese artists who had run into problems with the Communist government were placed next to each other. Ai Weiwei’s intricate bicycles titled “Forever” showed once again how abstract repetitions of an everyday object could lead us to see things with a different perspective. Gu Wenda’s 15-year ongoing global art project titled “United Nations: Man and Space” consisted of an installation of 188 flags made of human hair and featured unreadable traditional Chinese calligraphy. The meaninglessness of the written word seemed to symbolize fragmentation in communication and the human hair, interconnectedness of people from all over the world. 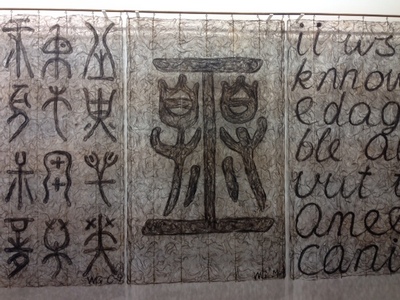 It was a treat to see some of Antoni Tapies’ work completed in 2007. Tapies passed away in 2012 at the age of 88 and was a Spanish Catalan painter, sculptor and art theorist. He was said to conceive his work as a form of meditation on “the void”: “that play of emptiness and fullness which composes everything and which reveals the meaning of nature”. Indeed, his “Vernis i Ilapis” at Timothy Taylor Gallery is meant to look at meditatively. 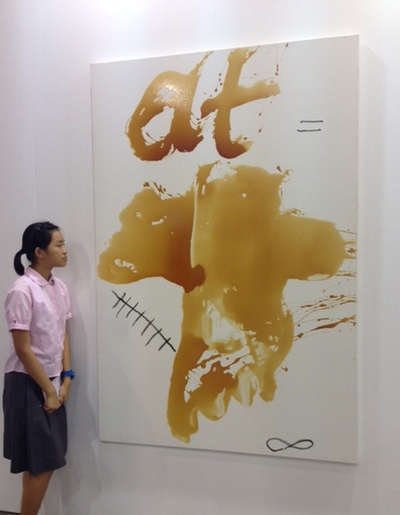 The fun element was important at Art Basel Hong Kong. Taiwanese Michael Lin’s “Point”, for example, encourages the public to sit and walk on the first three levels of the installation. He Xiangyu placed a life-like sculpture of a man lying faced down on the floor. Dressed in black suit and with a face resembling Ai Weiwei, many visitors tried to get a closer look to see if it was real or not. Swiss painter, sculptor, house builder, designer, explorer and philanthropist Not Vital spends his time between Beijing and Switzerland. His works at Galerie Urs Meile included a sculpture titled “Piz Nair”, which is a block of coal. People either love him or hate him due to his previous sculptures that showcased a plaster enlargement of the testicles of Michelangelo’s David or 1,000 bronze sculptures of cow dung, which he made and sold to help burnt victims in Nepal, and on and on. 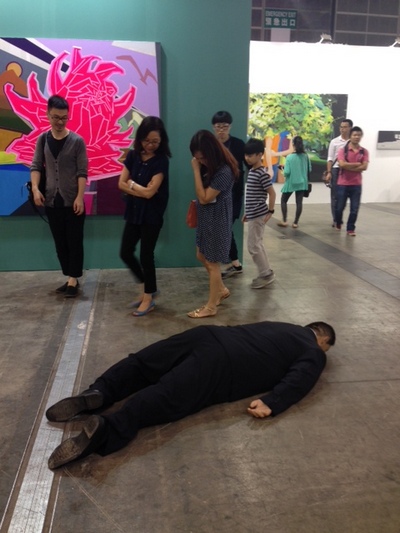 The Death of Marat by He Xiangyu 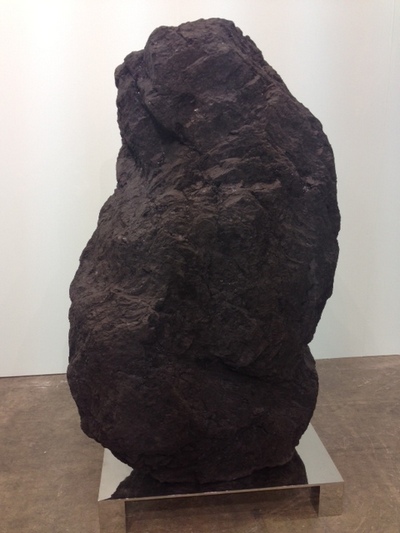 Piz Nair by Not Vital

The many off-site events included a gala dinner hosted by the Asia Society, openings by Gagosian, White Cube, Perrotin and Lehmann Maupin, among many other galleries for the art-loving cognoscenti from all over the world. Pace took advantage to inaugurate its first Hong Kong location. There were also daily “Conversations” or debates between museum directors and curators and a series of “Salon” talks with themes such as “Collecting and Archiving: Arts vs. Architecture”, “Activism Utopia” and “Made in Hong Kong: On Collecting Milk Pudding and Table Cloths”.

For 3 nights, the spectacle of a light installation was visible not only to art lovers but to everybody who cared to lift his head towards the city’s tallest building, the 490-metre (1,608 feet) high International Commerce Centre (ICC) in Kowloon. Berlin–based artist Carsten Nicolai is one of the only contemporary artists working simultaneously in visual and sound media and visualizing sounds. The installation, “α (alpha) pulse”, generated light patterns that pulsated on the entire façade of the ICC, the seventh highest building in the world. An accompanying mobile phone application can be downloaded to experience the music. 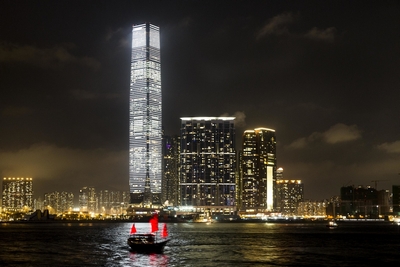 No matter how much bigger or better is Art Basel Hong Kong, I thought the best thing was the fact that people came either for the love of art or out of curiosity because of the hype. Hotels hiked their rates and top restaurants were booked days in advance. The mood was contagious and Art Basel Hong Kong succeeded in becoming the talk of the town. 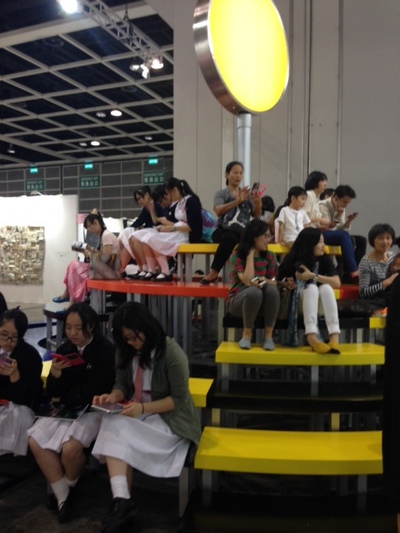 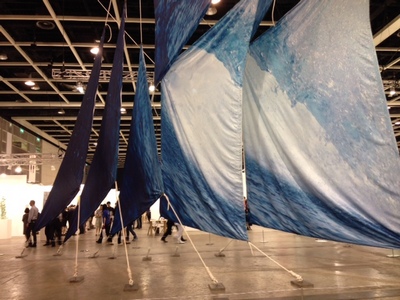