Just by looking at her paintings, you’d know who Ana Maria Velasquez is…

A woman who cannot help being sensitive and meticulous. According to her, three words define her: paper, scissors and receipts. Her hands work with the same materials that she uses and discards in her travels and at home in Colombia.

Those big birds on the table are actually vultures! I must admit I was shocked to see those scavengers, generally hovering around dumpsters, at the art studio of Ana Maria Velasquez, more so when I had expected to see her previous work, “Ciudades Contables”, images of fragmented three-dimensional cities made with paper receipts.

Urban landscape made with receipts? That’s right, receipts. I just can’t get over the image of those paper skyscrapers made of paper receipts carefully pieced together and suspended in midair.

But I could not find them anywhere at her studio.  Those obsessive urban landscapes had brought me to the Medellin city in Colombia to meet her, to have a cup of coffee with her, a nervous and perfectionist artist, responsible of such a fragile and yet  monumental masterpiece. 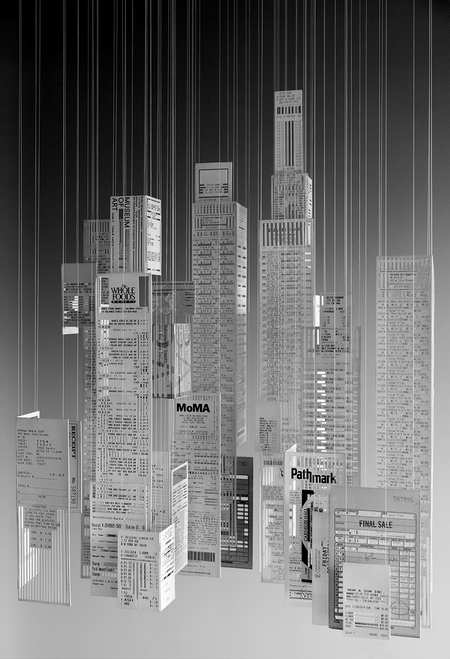 She tells me that right now her hands and mind are preoccupied with the challenge of creating life-size vultures using her daily garbage as raw material. “I have always liked  vultures,” she says, “they look like elegantly dressed gentlemen. My job is to meditate with my hands, and it is in the doing that I find the connections.” 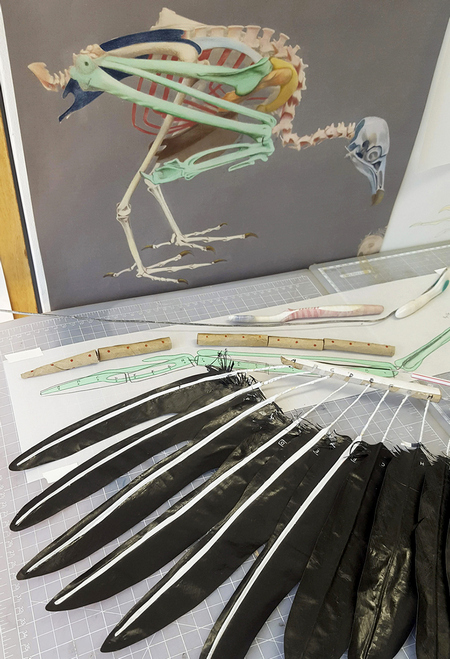 She struggles to find the right word to express herself; obviously her hands are the ones that really do the talking. She shows me a big black wing that she made with plastic bags for milk and tells me with a mixture of pride and fruition that the bone connecting the wing to the core of the animal has the form of the toothbrush that she replaces in her bathroom every now and then.

Her sensibility comes from looking at the world through grids and perfect cycles. She  wants to get out of that path, to be messy, to relax, but has failed once and again and always ends up doing the elaborate, the precise, the complex.

“I disliked being perfectionist,” she says in a firmer tone than usually, but she uses the past tense as if she has accepted and understood that her work as an artist is the best mirror to confront and exorcise her tendency to be detailed and meticulous.

“Obsession,” she continues, “has a trajectory, a sequence, a final destination.” That final destination points to a coming exhibition of the vultures born out of her daily garbage at the La Balsa art gallery in Medellin.

This is the way how Ana’s meticulous mind pauses and delves into everything she does, like a soulful devotee that holds on to her faith. This is how she approached to her illustration and collage project of “Victor, Sugar Cotton” in 2007, inspired by a candy street peddler. Following that same intensity, she amplified her vision and made “Paper Travelers: Five Sculptors to Read”, creating five life-size figurines of street people in paper, cardboard, wire and paint, their body covered with inscriptions telling their life stories written by author Beatriz Marin Aguilar. These sculptures not only formed part of a published story, they were shown at a traveling exhibition and wandered through different public libraries for one year in 2009. 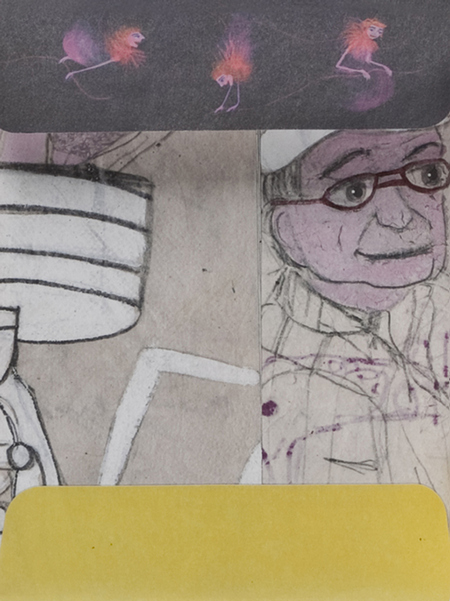 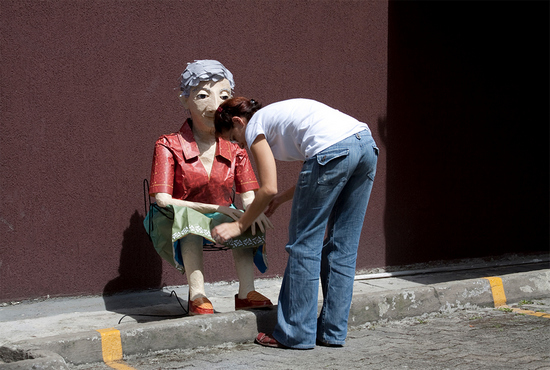 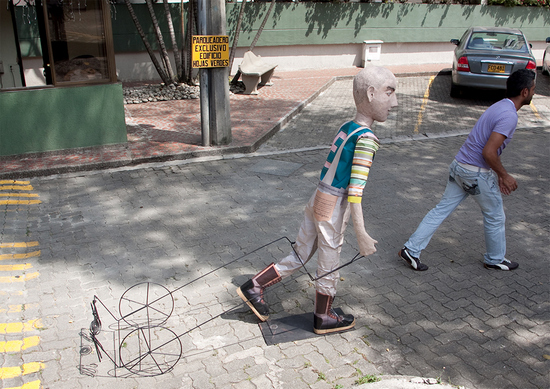 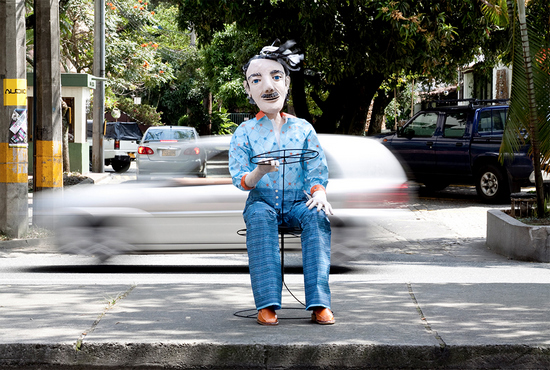 From invoices to sequins

While my host goes to the kitchen, I take the liberty to look around trying to find any trace of her “Ciudades Contables”. Nothing. Another cup of coffee is now in front of me, but still no signs of those installations made of little slips of accounting record, of invoices, an idea that began to take shape in 2005 when she decided to collect invoices, receipts, bills in order to keep a record of her expenses. This lasted for ten years!

Day after day and week after week, she kept record of the entire monthly expenses and put the receipts inside a translucent envelop, while making a graphic chart using over 30 different colors of sequins to classify the expenses. White for books, brown for theatre, dark blue for technology, light blue for train tickets and so on. She also used flags of each country she had visited to mark her trips. 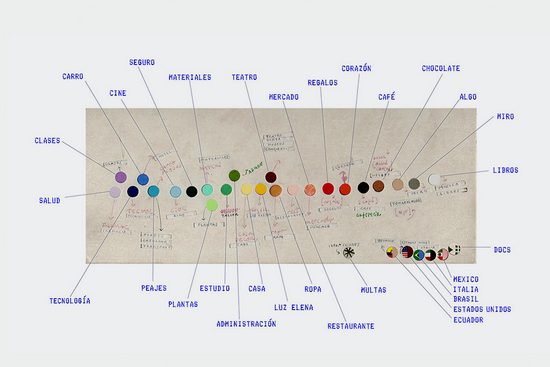 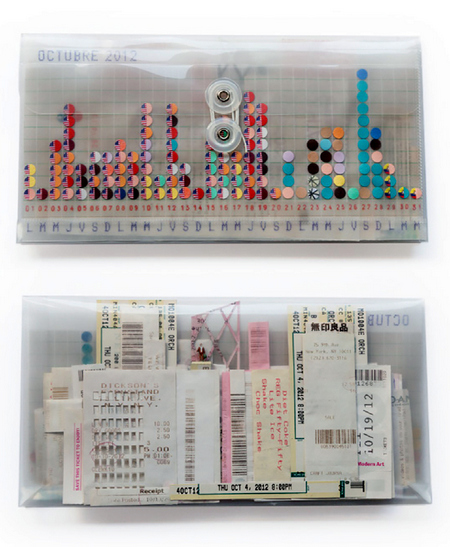 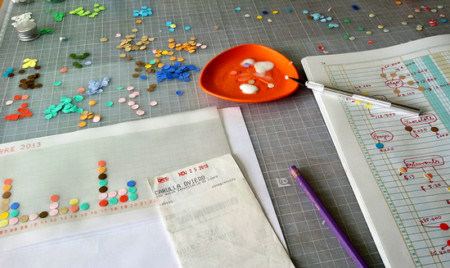 Into the first five years of her collection, she used the receipts to make her piece “Diaries”, a mosaic of translucent envelops filled with colorful dots. This was her first rupture from her figurative approach as a graphic illustrator. 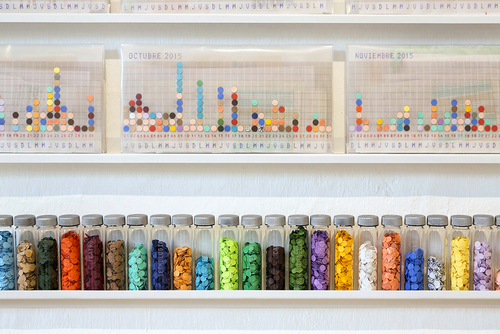 “More than the expenses,” she explains, “I was interested in the stories told by those receipts, that I had paid for a pair of shoes, the funeral of my grandma, a speeding ticket, the gas station on a highway.”

Her first exhibition dates back to 2011 titled “The Clippings Shop”. It showcased a series of 15 theatrical assemblage of small paper and cardboard collages. An intuitive process of color and composition that she has tidily packed into labeled boxes next to her work of over twenty years. 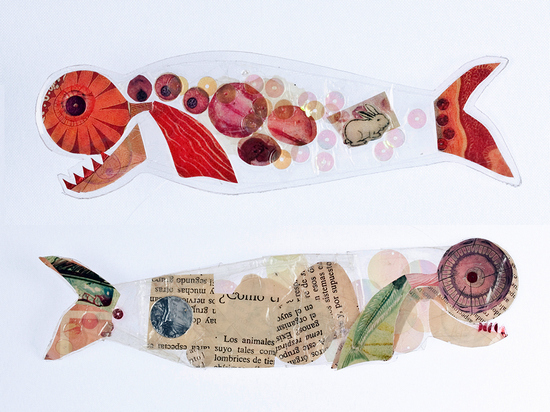 “Diaries”, not only took her out of her comfort zone, the accumulation of receipts posed  a bigger challenge: “I felt that my work was contained, so I decided to open it up to different cities where I began to find poetry in the objects themselves, they connected me to the city.”

Such was her connection that soon the receipts became the bricks of her new creation. She cut out the blank spaces of the paper, reinforced their edges to resemble building facades, suspended them as if they were ceiling mobiles, putting them together to re-invent the urban spaces of cities that she had lived, Medellin, New York, Los Angeles and Brasilia, each city with the receipts of things she had purchased there. 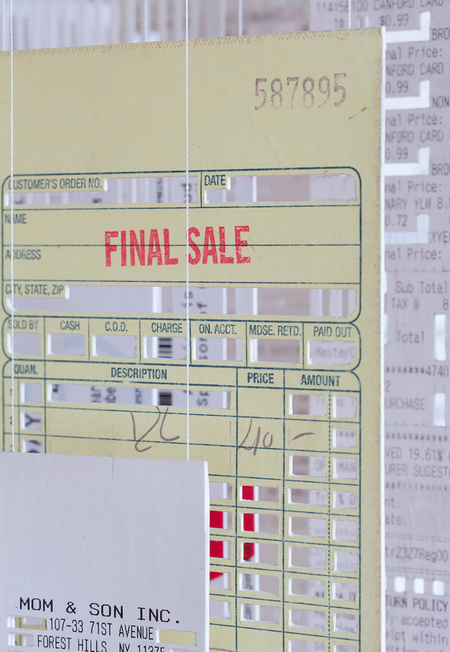 Reusing tickets and receipts as raw material helps me overcome the “fear of blank canvas”, she says, “the information provided by the material inspires me to create.”

In 2018 Ana got together her “Diaries”, “Ciudades Contables” and a whole universe of her personal expenses record to make the installation, “These Are My Bills!”. At last she turned her ten-year accounting into something more than a simple office file. She broke off from the ordinary and let it take off like butterflies…In the end this is what art is about. 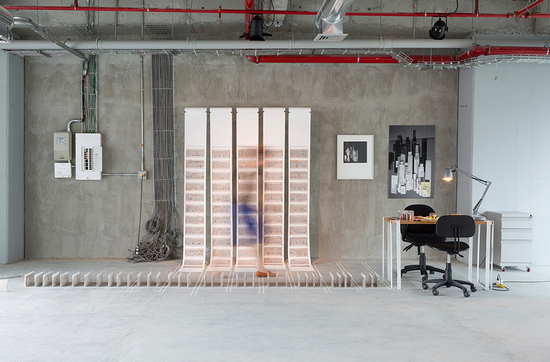 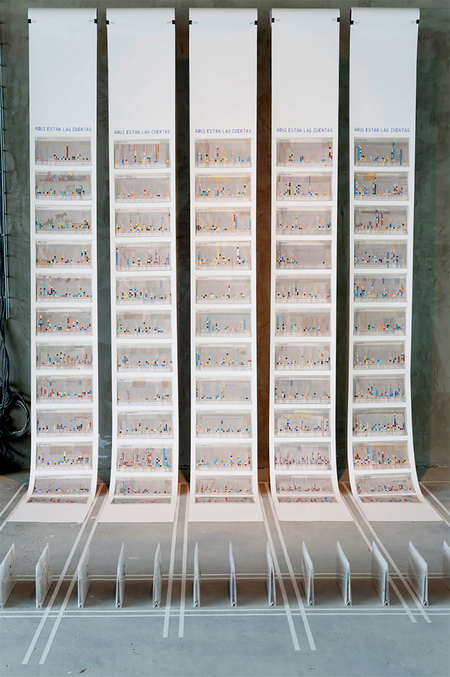 To talk about the artist’s work without mentioning paper is mission impossible, since this is the basic material that she has used for over twenty years. Her nostalgia for illustration appears to be ever present in her work with paper, as shown in the 2011 “From Line to Word”, consisting of portraits of Latin American artists, and “Canine”, a series of drawings of dogs in graphite and color pencils on paper. 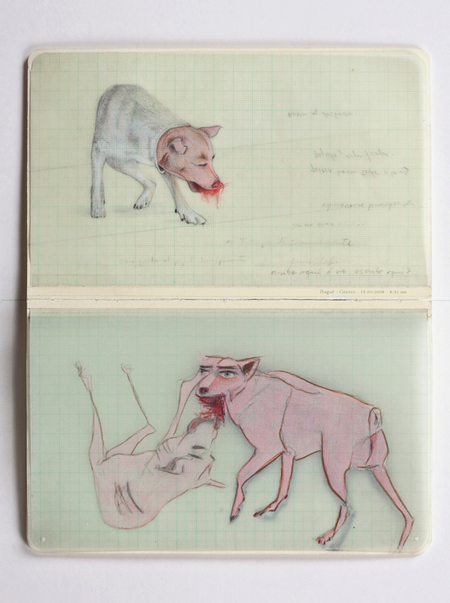 “It’s hard for me to give myself the permission to be an artist, to assume the challenge of showing people something that they don’t have the time to see”, she concludes.

It is getting obvious that I would not find her paper receipt buildings anywhere in her studio. As she notices my desire to see them, Ana opens a files cabinet and draws out a stack of large files. Each file contains an art piece, an installation, building by building inside individual white envelops, duly marked with the exact coordinates to be suspended with fine threads under a metallic grid.

The uninstalled jigsaw pieces mean nothing to me, and she sees that, so she takes me down to the storage in the basement of the building, the only place where chaos has ever reigned in her life. There, amidst old suitcases, boxes of gym tools and broken lamps, she keeps large framed posters showing some of her paper receipt cityscapes. Even in pictures, the magic of her work moves me.

Her meticulous life seems to always flow like the mechanical gears  of a watch, as shown by her virtual work desk on her website (www.anamariavelasquez.com), where anyone can peek in to see her work. Although her goal is not to mark time, her hands are like the two hands of a clock ticking forward, never stopping, following the traces left behind by our existence… enclosed in a circle. 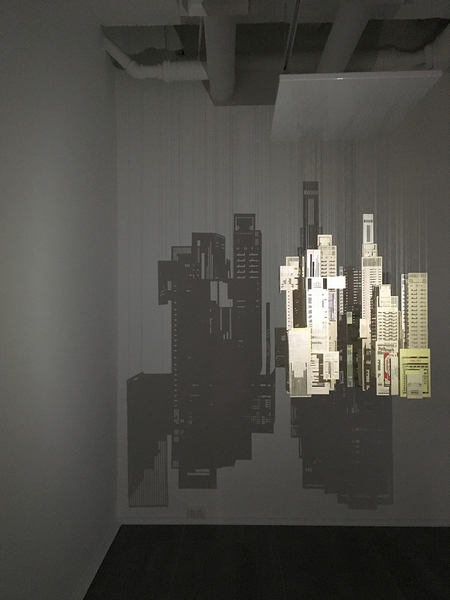 *Photos by Camila Mora and the artist’s archive.