Magic and reality found in translation

Magic and reality found in translation

The art world of Chelsea in New York has greeted this spring with exhibitions of a great variety of art work in terms of mediums, concept and intention. 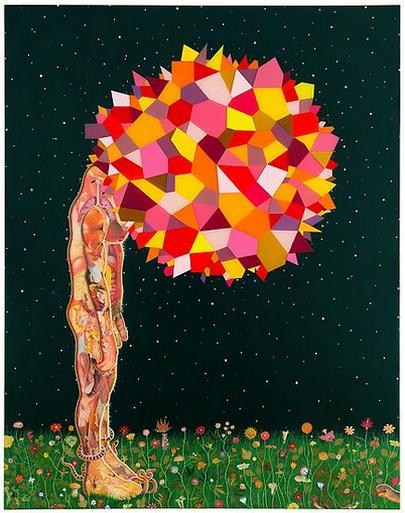 At the James Cohan gallery, the wizard of image combining and creator of fantastic and psychotropic worlds, the Californian artist Fred Tomaselli shows  his latest work, this time bringing in a new element to his art, a new touch of magic realism reminiscent of the world created by the Nobel laureate Gabriel Garcia Marquez. One major difference, however, is culture and geography- as much as the widely popular author is about magic realism in violence-shaken South America; Tomaselli’s approach has to do with the current affairs afflicting the Big Apple and subsequently the world at large.

A collection of 8 large paintings and 31 collages makes a colorful and at the same time powerful statement, showing how the ornamental insertion of the fantastic, absurd and metaphoric into stark realism could elicit an aura of wonder at an ethereal level.

It all started on March 16th, 2005, when Tomaselli became absorbed by the photo on the front page of The New York Times,  and described it in these words: “Bernie Ebbers, the just convicted WorldCom chairman, was clutching the hand of his wife as he was being expelled from ‘the Eden of Finance’ by the camera-wielding angels of paparazzi”.  He drew and collaged directly into the photo, and made Bernie Ebbers’ head an explosion of bright colors and a multitude of eyes that synchronized with the starlight coming out of his wife’s right eye.  From here he began a series of over 80 collages.

His large-scale paintings are also related to a realism furnished with the underlying ideas of absurdity, symbolism, humor, and a call for the power of magic to take over the factual world. 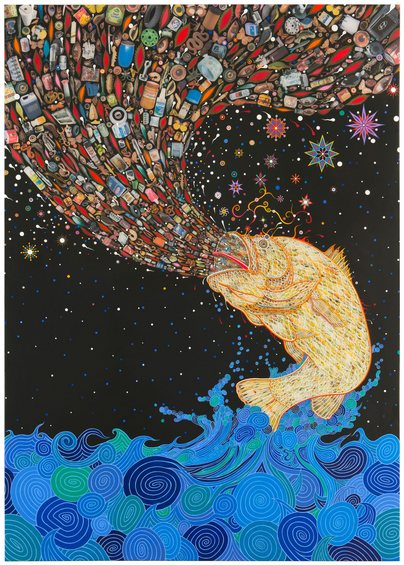 In his painting Gyre (2014), for example, a fish leaps from the frothing sea inhaling plastic household objects is a reference to the immense trash vortex in the North Pacific. In the painting Head, a naked man stands on a field of nature with snakes slithering around his feet, while his head becomes a heavy oversized geometrical ball gravitating downwards, as though addressing the nature below in a mind-boggling posture of existential meditation.

Tomaselli is known for his obsession with nature and use of elements of nature as direct metaphors to create his images, such as medicinal herbs, flowers, birds, butterflies… The existential questioning in his subject matter appears to be deeply embedded in a dilemma caught between the real and the unreal, seduction and disclosure, moralism and spirituality.

Unlike Tomaselli’s multi-dimensional narratives,  Steven Naifeh presents an exhibition of monumental installations of simple geometric forms at the Leila Heller Gallery in Chelsea and the Mana Contemporary in New Jersey. 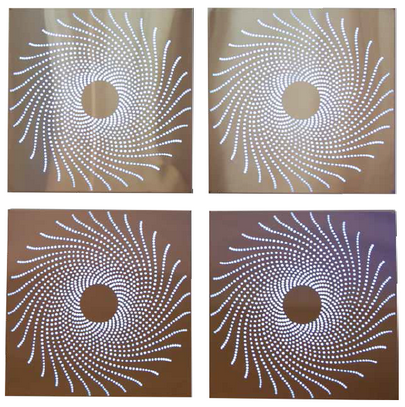 Naifeh’s work looks surprisingly contradictory to the complex surfaces of the paintings of Jackson Pollock, or Vincent Van Gogh, two artists that he has studied and written about extensively. The book “Jackson Pollock- An American Saga” that he co-authored with Gregory White Smith won a Pulitzer Prize.  Naifeh’s surfaces are clean, chromatic, geometric with sharp edges, calculated negative spaces, and well-defined shapes and colors. 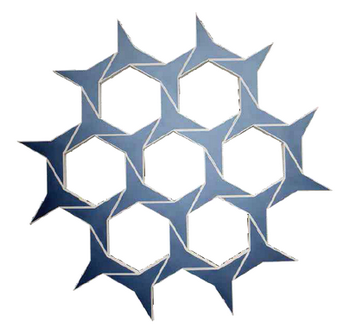 Naifeh’s background is complex and multi-cultural. With Arab grandparents and US diplomatic parents, the artist grew up and travelled to different countries in the world, including Jordan, Iraq, Libya, Oman, Pakistan and Nigeria. The exhibition is called “Found in Translation”. In his extensive quest, Naifeh has explored the relationship between the geometric abstraction of modern Western art and the old traditions of Arab and Islamic forms, and art as language is the predominant trait in his work.

Like Naifeh, we found another work that deals with language but in a different way at the Cheim & Reid gallery also in Chelsea. The Egyptian New York-based multi-media artist Ghada Amer ‘s solo exhibition displays large metal sculptures, made with layers of words, at times Arabic,  symbols and shapes, in an effort to also address the issue of cultural relationships between the Arabic and American worlds, but in a more individualist and personal way that also touches how culture influences the way how one sees others and one’s self. 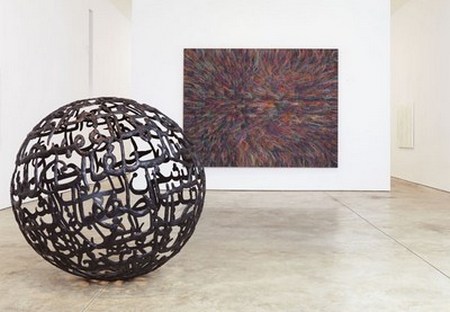 By using the traditionally feminine, domestic activity of embroidery, Amer’s  large scale paintings attempt to weave together language and form to make a statement about women.  She uses texts both in English and Arabic borrowed from feminist texts and manifestos to build beautified female form, challenging issues of stereotypes, ambiguities and social definitions of women’s body and sexuality.

Her work has been shown in many international galleries and museums, including Mathaf:Arab Museum of Modern Art in Qatar, Art Institute of Chicago, Center Georges Pompidou in Paris, and the Tel Aviv Museum in Israel. 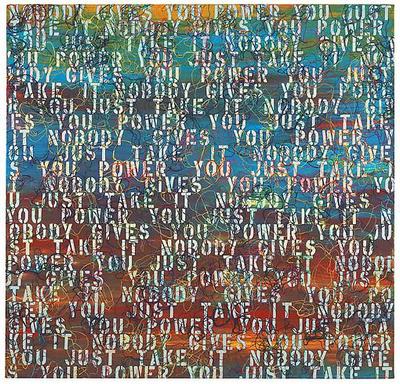