The picture plane by way of its reinterpretation had opened and closed by the time we, the generation of Godzilla, emerged out of art school.

We arrived as young painters into a world where we might behave like forces of nature, like the beast, to settle a score on nature’s behalf, changing attitudes toward matter and material.  We witnessed the erosion of large swaths of the natural world into planes of commerce, coming of age as the remaining Abstract Expressionists painted a last glimpse across an earlier American landscape as its dimensions that shaped them vanished.

That loss of space, once ubiquitous, has no consolation.  No consumer good, no fantasy can replace the feeling of magic within distant vistas. With power to create our new traditional landscapes of alienation, came the realization of its weakness.  The next generation reckoned with the loss, sometimes never having known the source of cultural dissociation.  The artists born in the thirties and forties, from Serra to Matta-Clark to Alice Aycock, addressed the philosophical problem of post-industrial matter, material, and, psychic displacement head on.   Without an external site for reconciling these dilemmas, painters sought a new visual culture within pictorial space.

By the time he had chartered his course in relation to form and surface, Julian Schnabel created a large number of works out on the surface of several beaches.  The images he created were, in a sense, swept on to the surface of the strand within the parameters of the tide.

With tarp or sailcloth awash in pigment he weighed the sensation of compressed or volatile sand, and, the living creatures within it, against the coarse weight of the hard-surface cloth.

Why I suggest a spectral quality about these works has to do with what goes on, and, what has been contested to happen on the picture plane.  The dispute of such things, especially for young painters coming of age in the 1970s, induced both positive deliberation and melancholy.

In daily life we saw the masters of late modernism live out their last days. Meanwhile the heirs to everything that was freeing and magnificent about new approaches to materiality, in substance and form, were still ripe in the early decades of their development.  This obvious sense of modernist mentalities fading, while a new order of materiality, and, criticism emerged; induced both optimism and a residual spectral reflection on our likely purpose as painters.

Then came the sudden losses of historic figures who had transitioned everything we knew about modernist thought, to everything that had been new: Philip Guston, 1980, Jack Tworkov, 1982, Joseph Beuys, 1986, Andy Warhol, 1987, Jean-Michel Basquiat, 1988. It’s worth noting that Sidney Janis died in 1989.

In 1989, Julian Schnabel titled a series of paintings, A Treatise of Melancholia. In 16th century England, Timothie Bright wrote a widely popular work by the same title.  His other famous work was Characterie.

This was his project to reinvent shorthand from its original form in antiquity, which relates perhaps more to Schnabel’s series than the title they share. 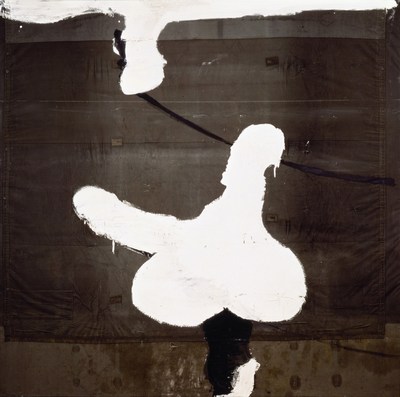 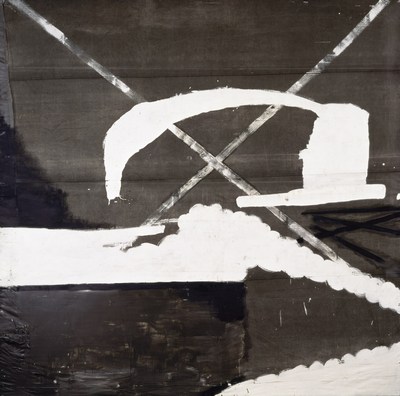 Bright in 1588 wrote to Queen Elizabeth describing the systematic coding of thoughts:

Short, that a swift hand may write orations, or the public action of speech, uttered as the gravity of such actions, verbatim. (To be written..) with few characters and easy, without precept or imitation of any.

Secret…like no other kind of writing.

Nations of strange languages may communicate their meaning together in writing.

Having already dealt with “causes, reasons, and, the strange effects of melancholy, a cure, and spirituall consolation for an afflicted conscience” in The Treatise, Bright definitely saw the sunny side of the street as the place to be.

Likewise, in 1989, Schnabel headed for the beach and many of them. Now burlap was still a part of everyday material culture in the 1980s.  In earlier times an expedient, if itchy, substitute for clothing fabric, it held Long Island potatoes and corn and packed a lovely metaphor for painters and everyone else on summertime work detail in the Hamptons.  It freshened the eye to the boundaries between corporeal and metaphysical realties and showed us that what might be seen as merely historical associations with the past, through urban eyes, was a real fact of existence near the shore.

Tempting as it might seem as a painting surface, burlap and sailcloth repel and attract moisture or pigments, able to wick them off as well as to absorb them.  The nearer you go to the Atlantic, the stronger the associations to these materials are with sailing.  Time may separate us from the passage of frigates but we will never loose the context of ships as vessels of human life, free and enslaved.  The East End of Long Island knew the currents of fate from Africa to the Caribbean to the Americas.

Several sailcloth works in the show were saturated with deeply engrained earth reds, as evocative of dried blood as any red might be.  Sails and blood built the modern capitalist world. The flung gesso that would normally underlie paint, rides the surface like a flayed human fragment, tossed there by accident or intent, a semi-sculptural mass that also reads as, yes, a shorthand gesture to explain what cannot be stated about life on the shore, its mysterious spatial realm and its eternal histories.

The series, Untitled (Treatise of Melancholia), register an explicit penetration of distant space, dead center. Schnabel’s mastery in them of an uncanny depth of field alludes clearly to the way we see space at the ocean.  Even without the enormity of their scale, the biomorphic deposits of gesso adhere like islands to the Atlantic currents.  New York City painters working on the East End of Long Island from 1985 onwards were deeply aware of the effects of Hurricane Gloria.  Artists and everyone who walked the shore saw gravel where expansive dunes had graciously sloped. In Bridgehampton steel farming equipment, buried prior to living memory, emerged from the depths of the strand.

Progress of Hurricane Gloria across the East End of Long Island, 1985.

This specter of layered existence with its dimensions of a time long ago, and a present suddenly and irrevocably altered, comes to mind in imaging just how it was that Schnabel spread his sailcloths of 1989-1990 to extend over a hidden topography to reveal an experienced evocation of that surface, a quality not repeatable or reproducible.

He brought a cover-the-earth sensibility to the task, like that of a man who’d come adirft to the shore already painting. Who, in the process, could reveal from the flotsam, the symbolic context of all the material lost in transit from its place of origin, as raw material, to the weave of its manufature, to its ultimate form as the matter of trade.

“Ships of the Line” were the largest of all Baroque war ships.  Their purpose was tactical, their mission to deliver canon shot broadside and avoid friendly fire. Unlike Turner’s ships, a vessel like the Poursuivante, a “Chaser”, had height and weight sufficient to hold the line against ships of equal stature.  Their currency expired along with that of neoclassicism.

This seems analogous to the evolution of among American painters to capture the means for a new abstraction in the 1990s.  To state that competition as subtly as possible is to see that era as a social phenomena of the past and to welcome today’s pluralism.

Yet, we wouldn’t have our pluralism without having undergone the long contest between a real new world art, and, pre-capitalist monopolies on material and spiritual worlds. 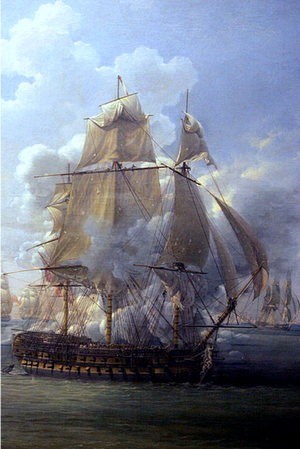 Louis-Philippe Crépin, Fight of the Poursuivante Against the British Ship Hercules June 28, 1803 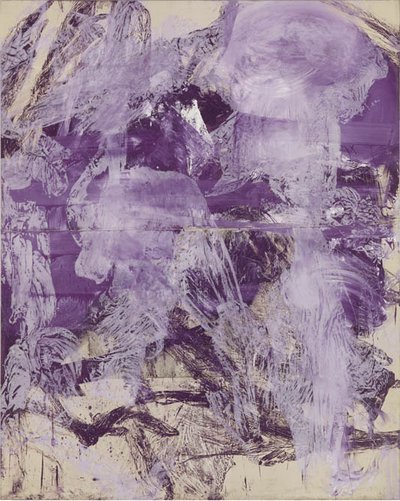 As if to signal how emulation of one artist by another can prolong fixation with the past,the Hat Full of Rain series emulates Twombly so closely I thought more of our adoration for Twombly than the paintings at hand, until one glance at Hurricanne Bob set his aims above personification of another artist.

That insistence on testing the material reality of constructing a poetics of political statements can also be seen in Beuys’ vision; to enter into society through ideation and act.  For  Schnabel, it was scale that set painting on a course to reckon significantly with imagery, history and ideology- as a material matter.

The open mind exposed on a scale as large as the most imposing portraits of dictators, helps us distinguish our fate from theirs.  Isn’t it best then to paint an indicaiton of life in the free world with a powerful hand, liberated from the studio and as purposeful as a Ship of the Line. 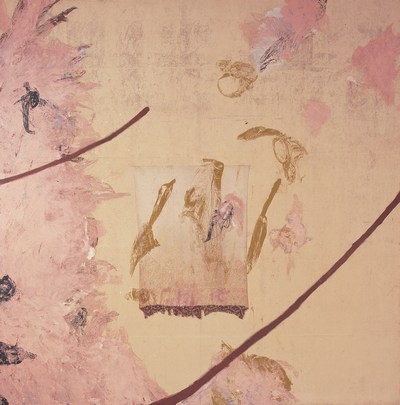 Which brings me to mythic figures, so like our own, without whose tragic flaws we’d be uncertain of consequenes behind every risk.  The risk implicit in Schnabel’s tarps laid down  the strand recall the end points of other eras, competitions are settled and the errors of some, lead on to another’s victory.  I found myself regretting that the earth red paintings were perhaps the weakest.  As I left the gallery to look back at them, I remembered Flaubert’s hero, Matho, whose heart is seized from his chest and laid on the beach.

Flaubert described in Salammbo the contest over possession of the veil of Carthage and how two lovers who compete for it mistake each other for deities. The terrible consequences leave only an image of the hero behind. On a beach, Matho’s time is up.

The sun sank behind the waves; his rays fell like long arrows upon the red heart.  As the beatings diminished, the planet sank into the sea; and at the last palpitation it disappeared.[1]

Attitudes toward the subject and object reveal people’s feelings toward the daily routine via the material substance of lively being.