Is Language in Art Dead?

Is Language in Art Dead?

Sometimes the most precious things are found by chance.

We were on our way to see something completely different, but as we saw a window display showing an exhibition about calligraphy, we changed our plans.

Little did we suspect that it was the most important show on the language of art that we had seen for a long time.  The show is not just about calligraphy or “calligraffiti” as the title of the exhibition indicates. It is about language in art; and language in general.

Why does language matter, now that we are in the computer age, when we do not have to make a lot of effort to communicate? Why an artistic, elaborate manifestation of language should be taken into account?

The word “calligraphy” dates back to thousands of years ago, when poetry was important, when a story had to be told to convey knowledge and wisdom, when prayers were practiced, when abstraction, symbolism, music, and literature were used to construct entire cultures. Then, it struck us the story that Steve Jobs, the genius of the Apple computers, had been passionate about calligraphy before he created today’s computer language. 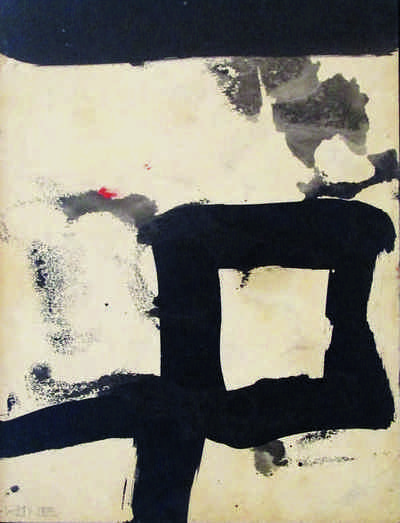 Sixty five artists of different times and countries in the world are gathered together at the Leila Heller gallery in New York to join into one universal voice to show the power of language in art.

The exhibition “Calligraffiti 1984/2013” is an update and expansion of an exhibition in 1984, curated by Jeffrey Deitch for the same gallery, which merged the street arts of graffiti with calligraphy as an art form.

Some of the artists in “Calligraffiti 1984/2013” are familiar to us, as they represent historic art movements such as the Dadaists through their photomontage and chance methods, the Surrealists with their object poems and automatic writing, the Abstract Expressionists, influenced by the French Symbolists that used a system of signs and symbols for their paintings and poetry, the Letterists of the 60s that incorporated a system reducing language to basic units into signs with color and rhythm.

The feature of universality in this show is best reflected by the participation of a group of graffiti artists from the streets of New York, Paris, Canada, and the Middle East, using rough materials of spray paint, dripping, loud coloring, three-dimensional lettering to express a hieroglyphic language derived from cartoons, sci-fi, electronic games, urban and pop subcultures. 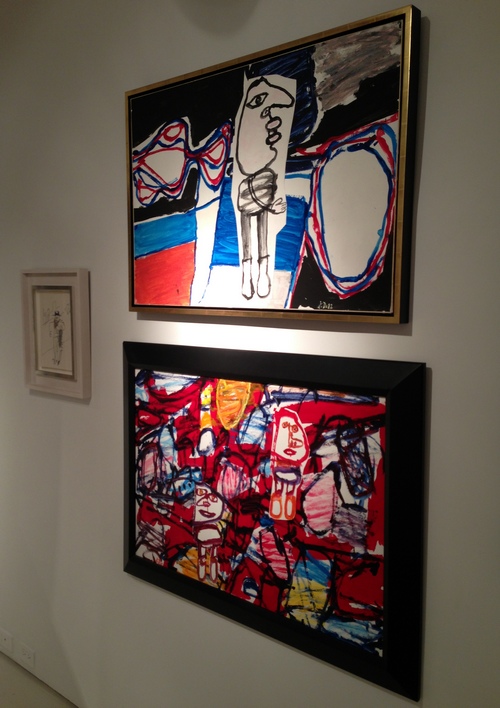 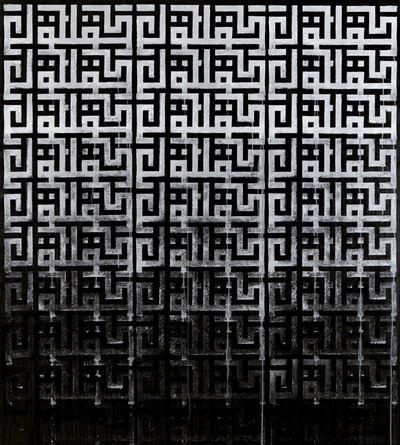 We found the work of the French artist L’Atlas, showing an invented language that looked like symbols of labyrinths, based on the idea that every letter is considered as a shape and every shape as a letter.

The New York-based Korea-born artist ROSTAAR (or Romon Kimin Yang) shows what he calls “Graphysics”, a fusion of graphic arts and physical laws governing the movement of energy through an intuitive process. According to the gallery, he is seriously interested in the Middle Eastern calligraphy, thus crossing different cultural boundaries to invent his own language. 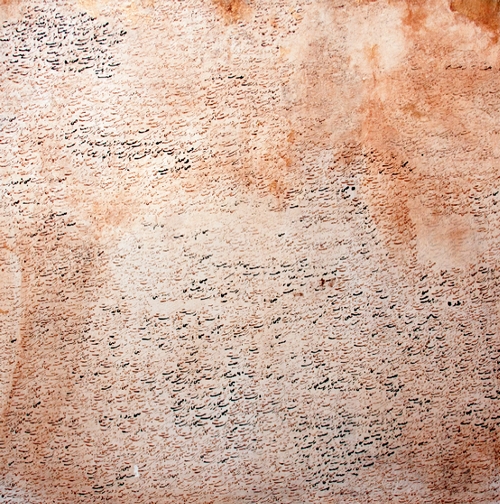 There is a vast repertoire of works, ranging from the delicate, lyrical, and somewhat harrowing marks of the celebrated Iranian artist Farideh Lashai to the forceful  gestures of the French Tunisian artist elSeed;  from the cement blocks covered with digital prints of  letters referencing religious and political visions on the concept of war by the Jewish artist Eugene Lemay to the so-called tri-partite  (the word, the medium, and the aesthetics) approach of calligraphy, inspired by religious verses, by the Saudi Arabian artist Nasser Al-Salem, and the powerful political and psychological statements made by the Persian artist Shirin Neshat with photos of people with calligraphy ingrained on their faces.

The show also includes a work by Isidore Isou in 1977 to represent a language system that he called “hypergraphic”, covering different systems of writing such as hieroglyphs, calligraphy, mathematical notations and the Latin, Hebrew, Islamic, Cyrillic, Chinese characters, and Japanese alphabets.

On the counter of the gallery we saw a large black box of work on paper by the Algerian artist Rachid Koraichi carefully crafting images related to mystical Sufi poems. 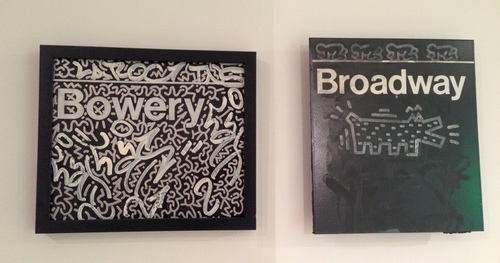 In front of it was an additional room filled with the graffiti of LA2 (Angel Ortiz), one of the leading graffiti artists in Lower East Side New York, who from 1981 to 1984 had jointly worked with Keith Haring in various graffiti projects. He is known to fill up rooms with a mixture of contemporary and Asian symbols.

In this show, we feel that there is, indeed, a persistent urge from artists all over the world to explore all possible ways and concepts to get their message through, to be heard, to communicate, to create imageries that can touch the world. And these messages reverberate in sounds and silences, abstracted forms and subtle visual connotations, and rhythm and dynamics that language can best convey.

Now, pondering about whether or not language is dead, we must say that language is more alive than ever, and it is expanding and becoming more and more universal, as the advent of computer and internet has shortened the distance amongst different cultures. It seems that now, the trend of the world- as many artists and scientists have predicted- is universality.