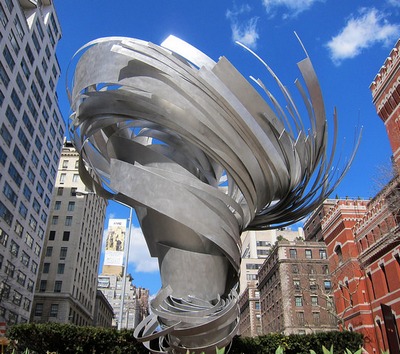 For four months, midtown Park Avenue in New York has been taken over by swirls of energy in layers of glistening aluminum and fiberglass, a symphony of seven apparently random installations that invite the public to “meditate” on what the American sculptor Alice Aycock calls “the philosophical ramifications of technology from the simplest tool (the arrowed and the plow) to the computer”.

The sculptures ranging from 12 to 27 feet in height and 18 to 70 feet in length, are installed on the mall of Park Avenue, where they can be seen from both sides of the avenue, either  from traveling uptown or downtown Manhattan.

Aycock is interested in the movement of wind energy and intends these sculptural assemblages to suggest “waves, wind turbulence, turbines, and vortexes of energy”.  “Much of the energy of the city is invisible,” she says, “it is the energy of thought and ideas colliding and being transmitted outward.”

Far from being invisible, the installations are strategically placed in terms of structure, site and scale to make an impressive statement.

Under the title of “Park Avenue- Paper Chase”, Aycock also references her pieces to the practice of making cut out paper models of visual ideas in sculpture and architecture dating back to Russian Constructivism. 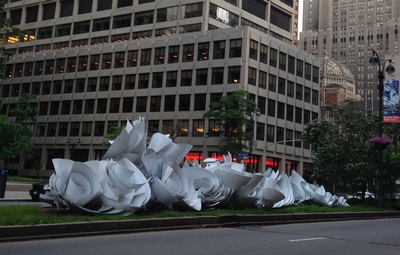 Park Avenue is one of the most affluent neighborhoods in New York. It has earned a distinguished reputation ever since art and urban beautification became one of this neighborhood’s exclusive concerns, and the non-profit organization The Fund for Park Avenue joined efforts with the Public Art Program of the City of New York’s Department of Parks & Recreation and private arts organizations and individual artists to show public art.

Every year The Fund for Park Avenue plants on the malls begonias in the spring and tulips in the fall, and organizes art installations, that include the work of artists of such repute and importance as Jean Dubuffet, Robert Indiana, Yosimoto Nara, Fernando Botero, and Deborah Butterfield, among others.

Alice Aycock, 67, is well known for her grand scale public sculptures and installations. Her  public sculptures can be seen throughout the United States, including works at the Washington Dulles International Airport, the San Francisco Public Library, a roof installation for the East River Park Pavilion on 60th Street in NYC, the “Star Sifter” for Terminal 1 at John F. Kennedy International airport in New York, an outdoor piece entitled “Strange Attractor” at the Kansas City International Airport, “Ghost Ballet for the East Bank Machine works”, Nashville, Tennessee, and a floating sculpture for Broward County, FL.

Her works are also in the collections of Brooklyn Museum, the Museum of Modern Art, the Whitney Museum of American Art in New York, and Los Angeles County Museum of Art, the National Gallery in Washington DC, and the Louis Vuitton Foundation. 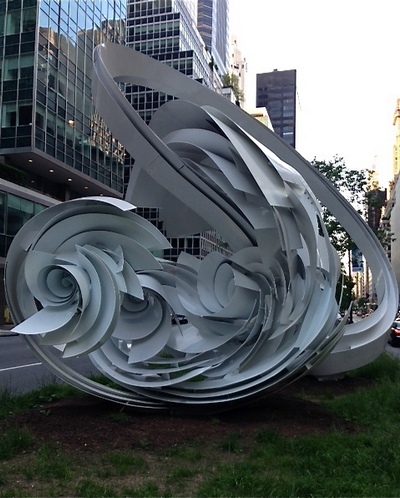