Home/Notes Around the World, Past Articles/Feel the Pulse of Latin American Art at ARTBO
Previous Next

Of the multifarious art fairs in the world, why come to Artbo, the International Art Fair of Bogota? To feel the vibe of the Latin American art, to take the pulse of the art market, to enjoy the energy of young artists, new galleries, the satellite events and open studios spotted all over this vibrant city.

“To see the world in another way,” a 17-year-old student happily said. 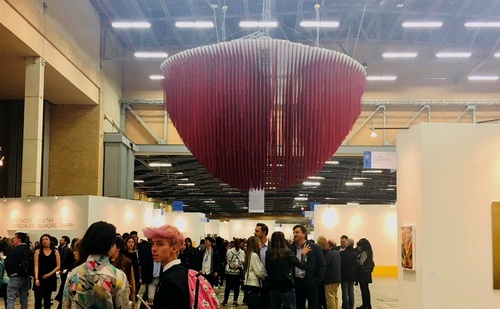 Visitors were greeted at the entrance of the fair by a gigantic half sphere made of metal bars by Venezuelan op artist Jesus Rafael Soto. Kinetic art is not new but the work titled “Red Half Sphere” expressed what Artbo intended to achieve this year: to make art inseparable from the viewer. Depending on the angle from which one perceived, the sphere changed, allowing people to wonder at the optical illusion. 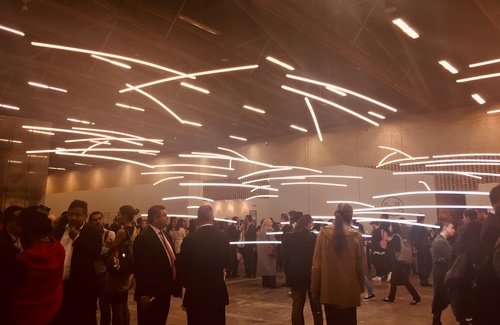 Dutch visual artist Henk Stallinga’s “Lumens and Lumen Balance” invited the visitor to approach and feel the luminous white tubes suspended from the ceiling at different heights. Many people did just that, without the usual shyness of touching a work of art.

As one drifts into the section dedicated to 26 young Colombian artists, it was inevitable to enter without stepping on a piece of art. The intention of Henry Alexander Palacio Clavijo’s rug, with the name of the section “Artecamara” in purple letters, is for us to feel the change from the harshness of the cement floor to something soft. 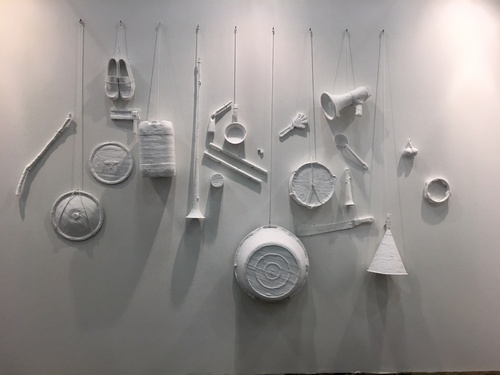 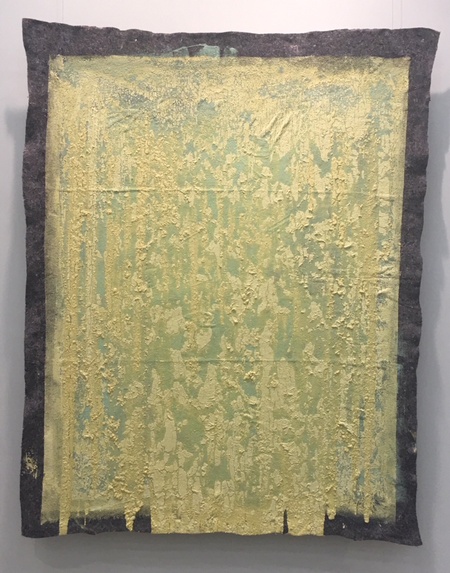 Ignasi Aballi, Translation of a Painting by On Kawara, digital print on glass

Colombian Francoise Bucher’s work “Macondo Archive (the cave of time cero) 1994-2017” was made from 26,000 tiny photos of people walking on the streets, all stacked up on rows so that the viewer could flip through them and revisit Bogota of the 60s and 90s. Mexican artist Omar Rodriguez-Graham’s paintings played with both recognizable and abstract figures in order to create a new reality while Amalia Pica, a London-based Argentinian artist whose works are part of the Guggenheim collection and Tate Modern, explored metaphor, communication and civic participation through sculptures and installations. Spain’s well known conceptual innovator Ignasi Aballi brought a piece titled “Translation of a painting by On Kawara’s 1978 ‘Friday’”, a digital print on glass inspired by the Japanese conceptual artist. Alejandro Sanchez’s “Incrustación” at Galeria 12:00 looked like parts of shipping containers embedded in the wall. Instead of steel, the boxes were made of wood and thin layers of zinc, prompting the visitors to touch them while wondering how the wall supported such heavy objects. 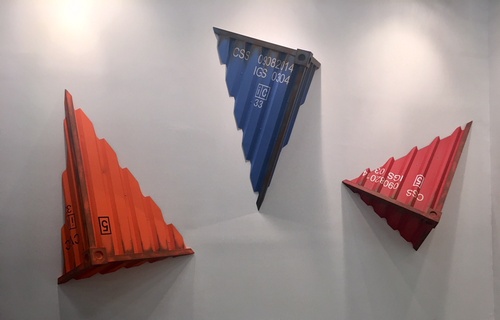 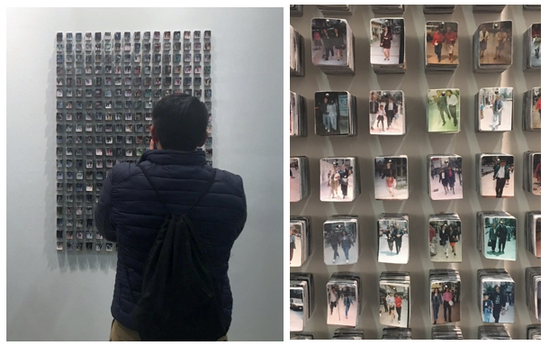 It’s overwhelming to look at so much art in one space. In its 13th edition, the four-day event has become one of the most important initiatives for contemporary art in Latin America. It gathered 75 galleries from 18 countries and exhibited over 3,000 works of art.

And it’s impossible not to talk about the satellite events parallel to Artbo. To reimagine the space and structure of the exhibition area has been a preoccupation of art fair curators around the world. At Barcu, the visitor could explore the old part of the city, the historical La Candelaria, where 14 Spanish colonial houses opened their doors for urban art. The initiative was to create non-traditional spaces for emerging and avant-garde artists. At Casa Azul, well known Colombian painter Luis Luna used uncommon materials to go beyond the flat canvas surface of a painting, tapping the issues of perception of nature and personal feelings, and filled the entire gallery space with an explosion of color and energy in a multitude of non-conformist dimensional explorations. 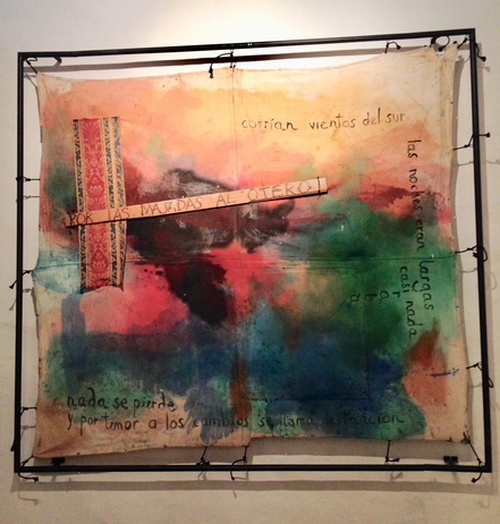 Feria Odeon, located in an old theatre in downtown Bogota, introduced a new format this year called “Free Plan”, an architectural term referring to non load-bearing walls that divide an interior space. The participating artists focused on multidisciplinary projects that emphasized on investigation and experimentation and the six videos shown in its screening room included documentaries and short takes from artists in Colombia, Spain and Holland. 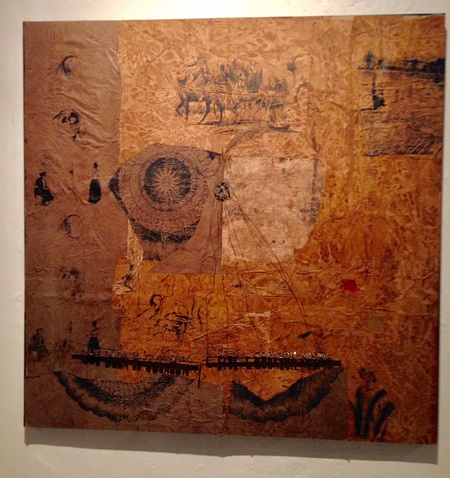 At the end of this four-day art event held in late October, when temperature dropped and the occasional rain made us scurry for cover, I came out feeling invigorated, pumped up by the creativity of the different expressions of art, wishing that this already successful event at a regional level can have the recognition that it deserves outside its borders.