Before it will move to downtown Manhattan in 2015, the Whitney Museum of American Art has provided an exclusive opportunity to see and experience Robert Irwin’s 1977 installation of “Scrim veil-Black rectangle-Natural Light”.

“Irwin’s work offers something profound that cannot be easily and quickly consumed”, says the chief curator Donna De Salvo, “the opportunity to see this work in summer light is not to be missed”.

We agree with the curator. We walked into the space on our way to see the major Edward Hopper show on the lower floor, and suddenly we felt we were transported to a different world, a world with many different dimensions and the perception of these different dimensions took place at the same time.

It was a sensation that the horizontal line had been displaced, and once we spent more time with the installation and grew familiar with it, we began to develop the feeling of the space which created a first dimension of reality and then, a second and third dimension of outside reality. 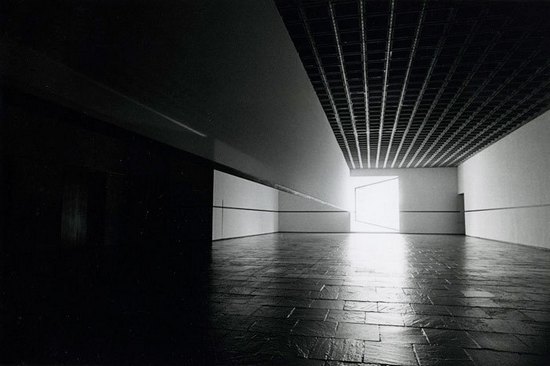 This is the first presentation of the work since its initial installation 36 years ago at the Whitney.  The installation consists of a semi-translucent white scrim, weighed down by a seemingly heavy black metal bar, hanging from the ceiling to five and half feet above the floor and runs from east to west across the 117-foot long room.

At the same exact height as the bar, a thick black line is painted around the gallery walls, and the gallery’s uptown fourth-floor Madison Avenue window is the only light source.

Each element of the installation has been displayed based on a precise geometric relationship with its surrounding. The light source of the museum’s building, designed by the modernist Hungarian architect Marcel Breuer, is ephemeral, as the installation will end on September 1.

Robert Irwin (born in 1928 in California) is the creator of the theory that art ought to be conditional to its environment, and his work is focused on perceptual phenomena, such as light, volume and scale. He is recognized as one of the artists at the forefront of the California-based Light and Space, a movement that involved artists such as James Turrell, John McCracken, Peter Alexander, Bruce Nauman.

Since the 1970s, Irwin has been making what he calls site-conditioned works, including the designs of the grounds at the DIA Beacon Center for the Arts in Upstate New York and the central gardens of the Getty Center in Los Angeles.