With the theme of “All the world’s futures”, the Nigerian Okwui Enwezor, the first African guest curator in the Venice Biennale’s 120 years of history, has got together 136 artists from 56 countries, of whom 89 artists are showing their work for the first time.

Enwezor’s intention is to “build a new focus on the relationship between art, the artists, and the current course of events”, taking into account the “radical changes occurring in the past twenty years” in society, as well as at a technological, economic, and environmental level. Showing a world full of divisions and deep wounds, based on inequality insuring an uncertain future, despite the enormous progress achieved by the world in terms of knowledge and technological knowhow, “we are still immersed in an era of anxiety” that the artists have been able to capture.

Amongst a large variety of creative approaches, we have found these to stand out:

• The work of the Japanese artist Chihaur Shiota, titled “The key in the hand”. Poetic and spectacular, it explores the links between daily objects- dozens of thousands of small metal keys, collected in different places in the world in a period of ten months- that unite people with things and their memories. In this installation we can see boats floating in a sea of red threads.

• Highly controversial is the work by Christoph Büchel at the Irish Pavilion, that converted a Catholic church into a Muslim site of worship. It is a polemic installation that reproduces a mosque inside the ancient Catholic church of Santa Maria de la Misericordia, of Byzantine origin, that has ceased to function as a church for 42 years. The intention of the artist is to denounce the fact that in Venice, there is not a single place of worship for the hundreds of Muslims living in the city and its surrounding areas. The municipality still considers the church to be a sacred site, although it has been a private property for over four decades. 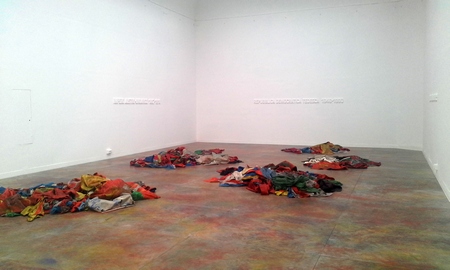 • “United Dead Nations” by Ivan Grubanov in the Serbian Pavilion is an installation to show his interest for the collective memory and what he calls “the dead nations”, or republics such as Yugoslavia, the German Democratic Republic, or the Great Colombia- nations that were separated or dissolved during the 19th Century and the second half of the 20th Century, when the borders of Eastern European countries shifted constantly. 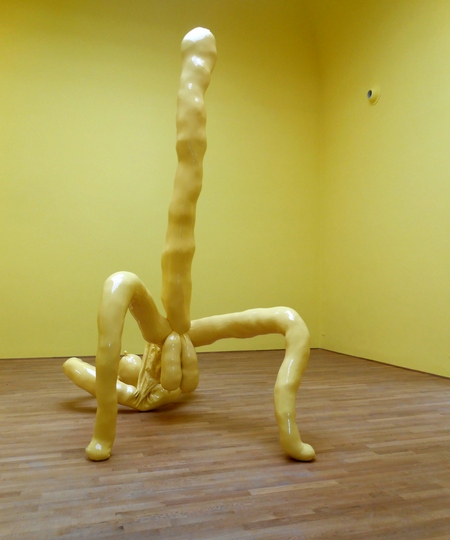 • Sarah Lucas, representing Great Britain, with the work called “I scream DADDIO” inside a completely yellow pavilion, where a sculpture of a four-leg phallus welcomes the visitor. In four subsequent rooms we find a series of human size naked female torsos with cigarettes placed in their orifices. An irreverent and at the same time, rather powerful statement on gender, sex, death. Human body forms the axis around which all social issues are defined, and thus humor is resorted here to realize this metaphor of life in a less devastating way, making elegant and constantly satiric fun of life.