An essay by Elaine Smollin 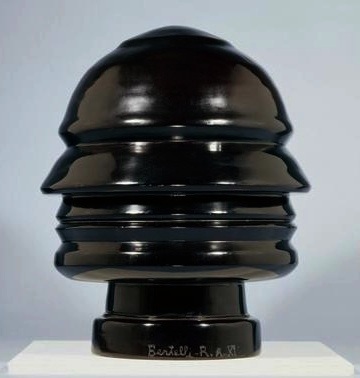 Last night, I quickly scanned the spiraling galleries for works that would outpace Renato Bertelli’s, 1933, rotating heads of Mussolini for a formal embodiment of psychic imprinting of modernization- the kind we now take for granted as imprinted on our collective philosophical dimensions of perception.

Filippo Masoero photographs did so, so well, they released imagery, long repressed, from my childhood. I had fought hard, as a young girl fifty years ago, to understand certain nightmares that came to me as the visualization of ancestral fears. Masoero’s photographs move as if an unseen hand could shake cathedrals and cities adjusting their existence toward a state of dissolve. 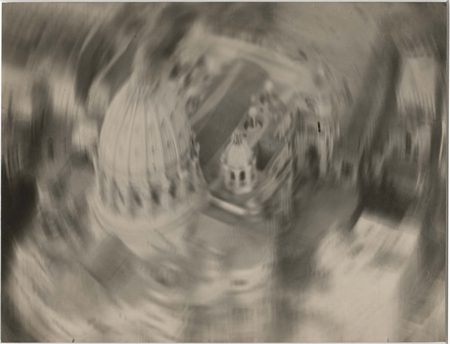 As a result of seeing works like these between the ages of eight to twelve, I had terrifying extremely palpable dreams of world cataclysm in the form of a painted vortex, much like Futurist imagery. Entry into these was inescapable and to make matters worse, they seemed to me to be handmade as if normal rites of craft and art had gone haywire.

As a small child, I lived in a world of mysteries, vocalized through fluid lingual forms and sing-song rhythms of old Lithuanian dialects, and with antics reenacted from great uncles’ Vaudeville lives, semi-pro golfers, an Olympiad, male- and female- pilots, purveyors of exotic timeless European foods, clothing designers, a 1909 fashion model, the opera singer our great Aunt, Paulina Stoshkas, and dairymen-composers of rural hymns.  And, yes- among them was the patriotic young painter who lost his external logic of mind in a burning sea, 1944. 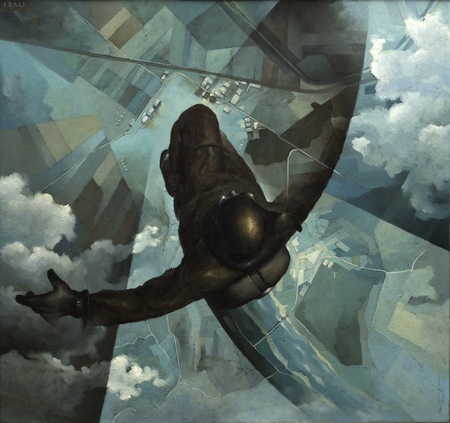 On their voices, paired with my parents’ high modern, unaccented, American speech, flowed powerful visions of tales and attitudes questioning the origins of love, joy, and, recurrent savageries. And, yes, they implored, especially my father, “When will the peoples’ revolution come to end violence as the weapon of greed?”

To reckon with astonishing rates of social and technological change, my grandmother assumed methods of inquiry and clarification to address the origin and cause of violence by speaking through the medium of dream divination.

Referring frequently to the oracle features of these visions, she searched in the wide solitude of her unconscious for answers to the fate of man in the face of remorselessness modernization, technological acceleration of violence and the indelible psychic shock of wide-spread degradations.

While she related the fate of society to my Dad in the Dzukijian dialect, I searched volumes of Readers’ Digest anthologies of the best writing of 1963 that lay about in a corner of her flat for anything I could comprehend as the high literature I was hearing so much about. (My grandmother was illiterate.) Even to a young mind it was clear that eloquence was not embodied in those pages.  Glancing around Josephina’s tenement for signs of the fate that filled her visions, (maybe she kept hints around?) I saw dried wild mushroom wreaths.

These were the newest wreaths among those posted every autumn from Dzukija, together with the families’ correspondence that soon was to suddenly stop.  And with the vanishing of their letters came a shift in the dimensions of the visions and worldviews that then began their slow incremental life of vanishing.

Since I began art school in New York City in 1972 and soon found work with two modern art dealers, both sons of the old European aristocracy, it was not until 2002 that I would begin to feel the tyranny of modernist painting, 1909-1944, begin to fade in relevance from my mind since, “Really,” as I told a friend beside me as we drove crosstown, “My Dad always told me, in painting and life,

“Stay on the sunny side of the street. There is originality in aesthetic and moral judgments. But you have to be free to enjoy it.”

Last night as a cold miserable rain fell on Manhattan in our present era of hard weather, a show of Italian Futurism can be seen at the Guggenheim, simultaneous to one inquiring into the imagery of life in “Entartete” at Neue Galerie. 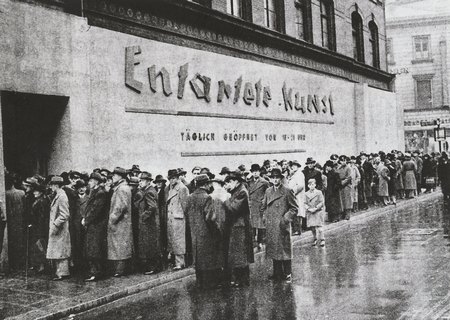 A mainly elder audience gathered clear around the block at Neue Galerie while at the Guggenheim I saw nearly no one over age 35.
It seems that the art that is much more challenging and more difficult to understand, attracted the younger viewers.