Home/Featured/Remember the Land
Previous Next

The symbiotic relationship between the artist and the land, the soil, natural elements is gaining momentum as the world is more aware of the woes of growing environmental crisis.

Already this issue concerns basic human survival, just as what the Land Art movement in the 70s predicted when they pioneered an art that directly addressed to the issue of land and nature.

Today, more than ever, artists such as Andy Goldsworthy, James Turrell, Richard Long, alongside a group of younger artists have constantly reminded us of the inevitable presence of nature’s elements in the process of artistic creation, and its manifestation, however transient and ephemeral.

One might hold that environmental survival only matters to science, since science has the capacity to both help and destroy our environment. Where does art fit into the equation?

If we ponder upon all the ideas that have driven the world into anything- either construction or destruction-, we’d realize that art has always been the first to sow the seeds of consciousness; without consciousness, science would have no guidance, no inspiration, and any human deed would have missed its purpose. A purposeless, mindless, powerful engine roaming around like a headless chicken whose only fate it is to bleed to death.

Watching this extraordinarily uneven and random beauty and elegance, one cannot help but remember the texture of the land and the unpredictability of nature. 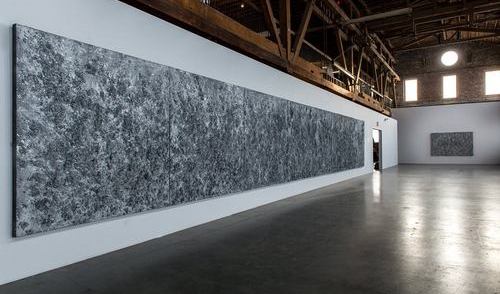 It is also not hard to perceive the intimate relationship between the artist and his environment, the earth, the land, and the stuff of Nature.

Under the somewhat ominous title “The Last Day”, the exhibition was held at the Pioneer Works Center for Art & Innovation, an organization focused on the creation and discussion and synthesis of art, science and education inside a historic building that had housed one of the largest machine manufacturers in the United States. It is interesting to witness the choice of the setting and the way how the painting relates to the setting and its story, how its surface, the complex layers of vibrant colors cracking through the surface, project an uncanny aura reflecting the earth’s very essence.

In his exploration of the land, Sodi seems to have made special emphasize on experimentation. His art is not always a response to the environment or setting in which his work is placed; I suspect that he goes even further, and literally imbues himself into the very alchemic process by which Nature moves, thus the ideas of chance and a spontaneous reflection to chance become inevitable. 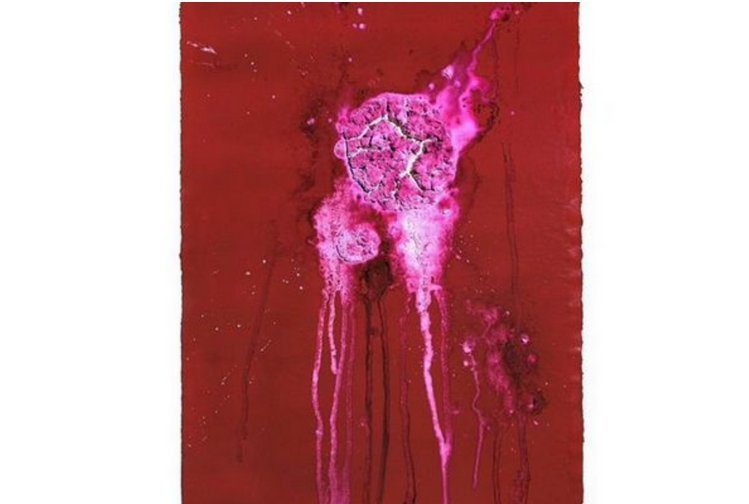 His bronze sculptures currently shown at the Bronx Museum of the Arts in New York are the result of such a process. Sodi calls them “organic”, since they are made with a mold that comes from pieces of sculptures that he created previously but were damaged in his studio in Brooklyn during Hurricane Sandy.

It appears contradictory- as Nature might be at times- that he chose to make these sculptures with such a permanent material as bronze, when the very concept had come to him following moments of pure experimentation and chance. He made the original sculptures by dropping material at random everyday onto the base in order to create over time stalagmite shapes. His goal was to find the accident that is achieved when many variables are involved, and yet he wished to exert the minimum control over the actual elements used.

To me, Sodi’s work is a direct, spontaneous, and physical approach to the issue of the land, and his monumental landscape or a few chance objects installed in a specific space have somehow acquired the power to strangely move the heart of the viewer, and yet at the same time, provoke the mind to think, or perhaps to remember or re-imagine the beginnings of earth, and reassess our relationship with it.

In this year, Sodi’s works can also be seen at the Noguchi Museum in New York, the 2015 Venice Bienale, and Scai the Bathhouse in Japan. 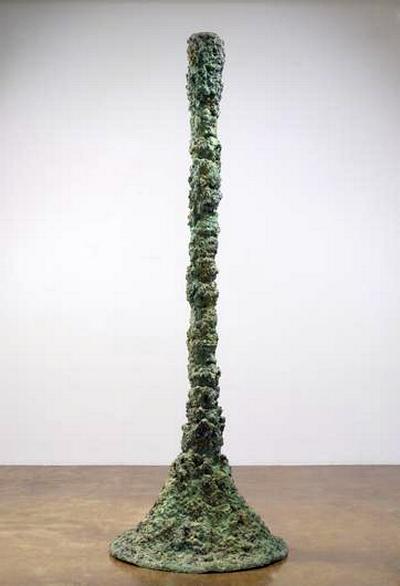 *Image on slider: Bosco Sodi at the Bronx Museum.