There is a park in New York City blooming with red mountains, yellow coastlines and copious blue cascade.

If you look closer, you would find that these elements of a landscape in spring and summer are actually hand-knotted nautical ropes covered in paint.

This is a monumental installation consisting of 1.4 million feet of rope, which is 20 times the length of Manhattan. It is covered by 3,500 gallons of paint, and it weighs a total of 100,000 pounds.

The artist, 34-year old New Yorker Orly Genger, collected repurposed ropes from hundreds of miles up and down the Eastern seaboard, with the idea to bring elements of the coastline to the urban setting of the Madison Square Park, thus redefining the park’s landscape. 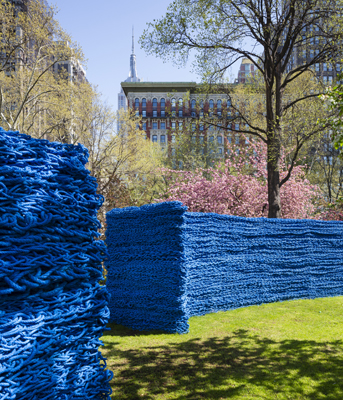 The park is located in an exclusive area, surrounded by iconic architecture that includes the Flatiron Building, the Toy Center, the New York Life Building, the New York Merchandise Mart, the Appellate Division Courthouse, the Met Life Tower, and One Madison Park, a new 50-story condominium tower.

Genger is well known for her large scale labor-intensive sculptures as well as fashionable small wearable sculptures such as bracelets. For the installation at the Madison Square Park, Genger wanted to create a work that would “impress in scale but still engage rather than intimidate”.

She is interested in the tradition of knitting because “it carries the sharing of stories” and the repurposed robe “brings with it the stories of different locations”.

“By knotting it, a space is created for the words and thoughts of viewers in New York City to complete the work, creating a silent dialog that waves along”.

The Red Yellow and Blue will remain in the park until September 8, when it will travel to the deCordova Sculpture Park and Museum outside Boston, scheduled to open in October.

The installation is commissioned by the Madison Square Park Conservatory as part of a contemporary art program launched in 2004. It has shown works by artists such as Mark diSuvero, Bill Fontana, Anthony Gormley, Tadashi Kawamata, Sol LeWitt, and Roxy Paine, among others. 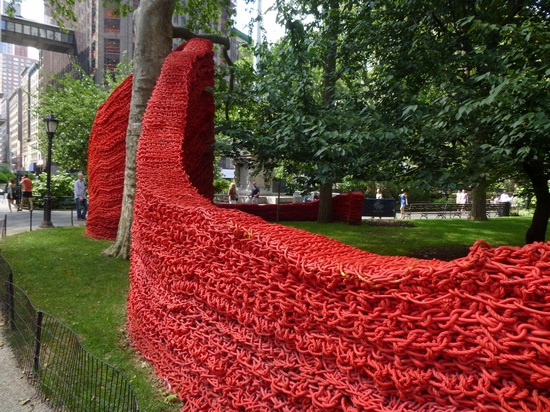 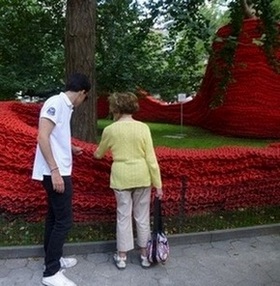 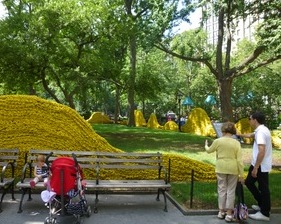