Surrounded by ancient city walls dating back to 1370s in central China, this year’s 13th Pingyao International Photography Festival opened on September 19 thru 25. Despite large-scale destruction of historical sites during the Cultural Revolution and beyond, Pingyao is a rare jewel that has succeeded in preserving intact the Ba Gua pattern (eight trigrams in Taoism) for its city layout. During this week-long festival, thousands of people from all over the world will be able to marvel at the power of photography in exhibitions taking place on the narrow streets of this UNESCO World Heritage Site.

If the past is any indication of its importance, the festival has showcased works from some of the world’s best known photographers, such as Ansel Adams, war photographer Robert Capa, Marc Riboud from France, as well as Chinese revolutionary photojournalists Sha Fei and Wu Yinxian, social documentary photographers Sebastiao Salgado from Brazil and Eugene Richards from the US. Agencies and publications such as Magnum, Paris Match, Aperture Foundation and National Geographic are regulars at the festival, among many others. Over 120,000 photographic works from 309 countries have been displayed so far.

Colombian artist and photojournalist Fernando Cano Busquets is present at this year’s event with a black and white series that is incredibly apt for this ancient city. The series of 6 photographs titled “Pueblo” (Village or People) reflects his intense interest for ordinary people: peasants, carrying a load in the cobblestone streets of Villa de Leyva; a convention of sorts with men in hats in Santa Sofia; the inquisitive look of an old man as a young girl crosses a door in San Antonio del Tequendama…His images reflect human conditions that are universal in theme and shared by all walks of life in equal measures: loneliness, beauty, anxiety, love. Apart from beautiful photograph books (“Suramerica: Un Continente de Agua”/South America: A Continent of Water and “Colombia, Carnavales y Fiestas”/Colombia: Carnivals and Festivities), Cano is also a published writer.

“The only place that all human beings are equal is when they are on the street”, Cano said. Rightly so, and at Pingyao, located in a continent totally different from his own, Cano’s images feel at home. After all, the Pingyao exhibition is also known as “the people’s photo festival”. 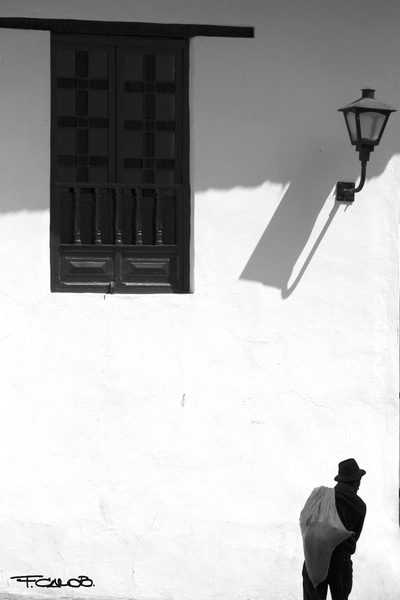 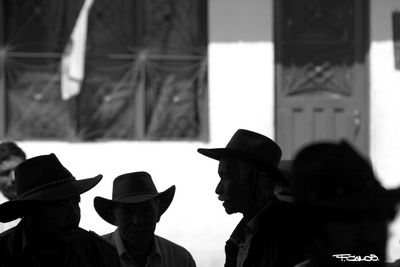