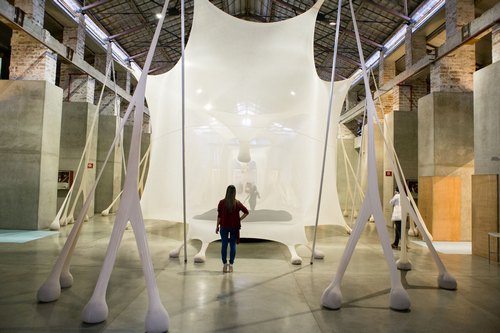 Two groundbreaking art events are held in Medellin, the Colombian city that this year has earned the reputation of the most innovative city in the world.

The first is “Antioquias- Diversity and Imaginaries”, an exhibition held at the Museum of Antioquia. The second event, under the name of “SaberDesconocido” (KnowUnknown), takes place all over the city, led by the Botanic Garden, Museum of Modern Art, Museum of Antioquia, and the Naviera, a beautiful building of the 40s, conceived in a sober expressionism, reminiscent to the naval architecture, converting the entire city into a whirlpool of culture, imagination, and innovation.

The “Antioquias- Diversity and Imaginaries” carries the name of the province of Antioquia, of which Medellin is the capital. Curated by the Venezuelan Nydia Gutierrez and the Colombian historian Juan Camilo Escobar, the event uses the name “Antioquia” in plural because here it deals with the issue of the identity of a whole people, its plurality, nationalism, regionalism, migration; its races, culture and lack of culture, the good and bad of how a leading region of the entire country is perceived.

A well curated explosion that perceptibly oscillates between what is historic and what is contemporary from the museum’s permanent collections, art works, paintings, sculptures, maps, architecture, music, film and literature, and the work by a group of invited contemporary artists summoned to discuss, debate and deal with the issue of identity of the region of Antioquia, one of the most admired, hated, and questioned regions in this South American country, stimulating the reflection of a sensitive theme that has provoked highly diverse reactions such as the construction of imaginaries, which is a particularly strong feature of the region, though not exclusive.

At simple glance the exhibition appears to be a regional discussion. But, in reality, it is part of the globalization in which we gallop on a daily basis, as seen in similar approaches prevailing in Spain, in the region of Catalan.  It’s interesting to watch how a contemporary artist like Fernando Arias has managed to stir a nation-wide heated debate on the theme of belonging, with his work with words, placed strategically on the façade of the Museum: “Hantioquias”. “This serves us to confront in a way the issue of who we are or what we say who we are”, the artist affirms. 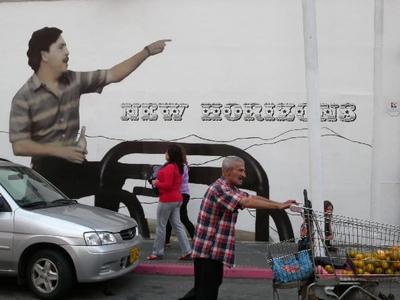 Carlos Uribe, with his monumental work on the world’s most notorious drug lord Pablo Escobar, causing discomfort among a certain sanctimonious precincts of society obsessed to view Escobar in simplistic terms of “evil”, as the artist holds, “but there is nothing more up-to-date and contextual to really understand the history of Antioquia (where Escobar was native and operated his infamously powerful drug trafficking business) and Colombia as the new horizons opened by drug trafficking in the diaspora of the world: a new way of colonialism as parody of the American Western. “ 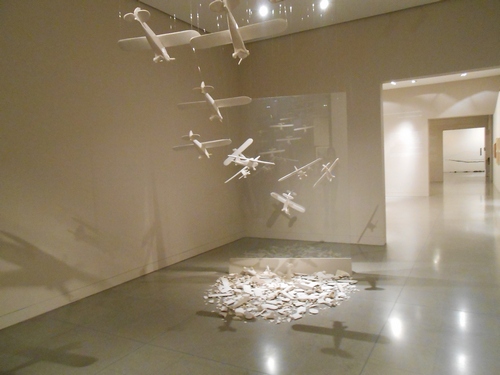 Esteban Zapata’s work “Abriendo Caminos” (Opening Ways) is an installation of small aircrafts that go about in the air and crash on an enormous glass, represents how the so-called American Dream is seen from a country like Colombia.

Ana Patricia Palacios’ paintings are an offbeat probe back and forth between the past and the present, based on Heroes and Antiheroes that configured the history of a region and its communes, disclosing a reprise of Rap songs of the region’s inhabitants chanting their struggles, their triumphs, their sorrow, their defeats in lyrics written on the surface of the paintings, flanked by a sound devise with recordings of the songs. The paintings are accompanied by drawings and sculptures exploring the same issue.

The work of Lybia Posada is an installation of small pictures where you could read excerpts of the regional hymn, but as questions, and within a carefully elaborated colonial ambience dominated by the typical colors of colonial gold and red. 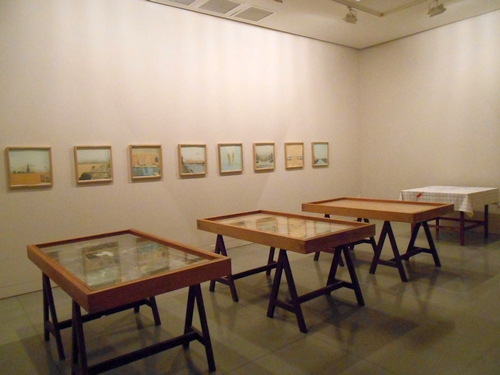 The group Utopia, which composed of three architects, displays an imaginary city with their maps, drawings, props and installation, mingling emblematic Egyptian and European architecture with the Medellin River crossing through the city, thus giving it a new dimensionality and configuration.

The second event is the International Artists Salon: SaberDesconocer (KnowUnknown), curated by 5 curators led by Maria Angela Mendez, with the participation of 108 artists from different countries in the world.

As the name denotes, the event is a dichotomy between what is proper and strange in a territory, and not trying to get the two opposing ideas on with each other, but rather bringing them to a truce. One part of the exhibition “Saber” or “Know,” refers to what we know, ancestral knowledge and the traditional; and the other part, “Desconocer” or “Unknown” refers to a place of doubt, ambiguity, and the uncertainty of the new. It is about a mutual acceptance between what we know and what we do not know; over 100 artists with their own different universes; and not one single knowledge, unique or true, staggering away from doubt and uncertainty. 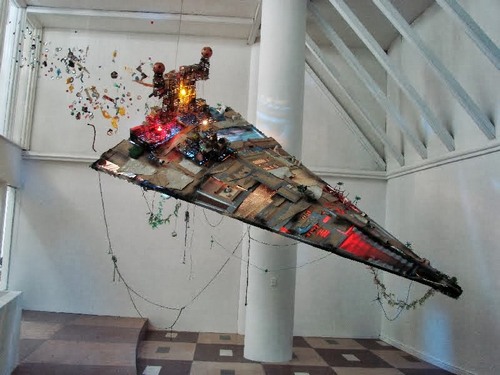 In the show Simon Vega, Lida Abdul and Ernesto Neto showed an exceptional quality in terms of concept and structure.

Simon Vega presents a work of evident precariousness in a game between an apparent punctilious technology and informal construction methods and built a beautiful space object with recyclable materials in an emerging aesthetic marked by necessity.

Lida Abdul’s work is a video, luminous, silent and empty, juxtaposing the political space with the dream space, the absurd, and Ernesto Neto’s exuberant installation, an enormous transparent cave that allows us to penetrate into an imagined and unknown world.

Among the Colombian artists stand out Fernando Pareja and Leidy Chavez with a nearly theatrical installation of lights shown over a platform full of tiny soldiers in an attempt to narrate the war; German Botero with constructions of palaffite architecture posing environmental issues; Camilo Echavarria with a fixed take video of a profuse and spectacular Colombian landscape, where time moves slowly; Abel Rodriguez with a series of botanic drawings making reference to the Amazon ancestral heritage; Alex Rodriguez with an interesting installation of architectonic structures made by pieces of school classroom desks, next to a map-wall of the city, made of a collage of tickets and ballots sold outside the classroom and by crack peddlers and vendors, questioning the drug dealers’ appropriation of territory; and finally, the controversial work “Ceramica Alzate” (Alzate Ceramics), surprising and ingenious “Prehispanic” pieces, copies made at the end of the 19th Century and exhibited by the Natural History Museum of New York and Paris, successfully tricking the most qualified scientists. 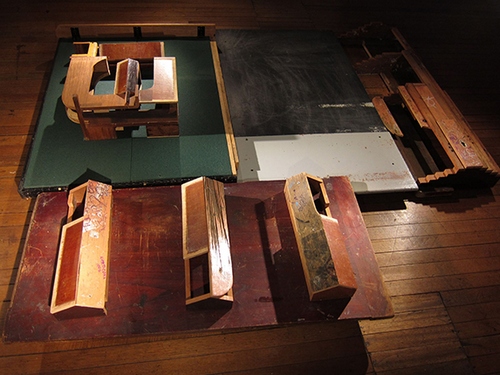