Home/Featured/Bosch at El Prado
Previous Next

Walking into “Bosch: The 5th Centenary Exhibition” at Museo del Prado in Spain is to step into a world of its own. Colorful, vivacious, majestic, Bosch takes you into a place of original birth, capital sins and death, angels and demons, heavy in symbolism, repetitive in the search for religious and spiritual purity.

Divided in seven sections, the Centenary Exhibition aims to commemorate 500 years of the death of the Dutch painter, Hieronymus Bosch. In preparation for many years, the exhibition achieved to amass the greatest number of his works ever assembled. It also included some of the works produced in Bosch’s studio or by followers of the lost originals. The richness of this exhibition allows the viewer to understand better the context in which Bosch produced his works, the personality of some of his patrons and the assignments he was tasked with and to peek into the imagination of this fabulous early 17th century painter. 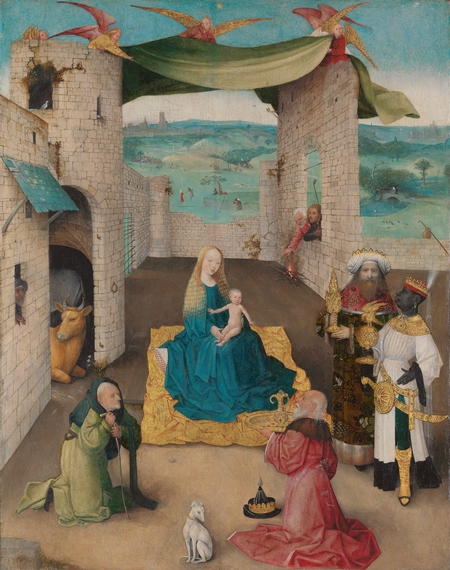 Adoration of the Magi- Oil on panel- 71x57cm

Probably Bosch’s earliest work (circa 1475, as with most of his works- dating is disputed-) is an oil painting on panel called “The Adoration of the Magi”. It depicts the interior of a stone house as if it were on a theatre stage, in the same manner as works of representations of the Virgin of Miracles in his hometown. It has a strong perspective but lacks the diverse proportions of the characters in his later paintings. The triptych of the same name (circa 1494) is a much more elaborate piece of work. The three panels depict the arrival of the salvation to the world (Mary with child) and the universality of redemption. As in many of Bosch’s works, the odd element or character here is a naked figure partially covered by a red mantle, which is believed to be the Antichrist.

“Garden of Earthly Delights” is considered the most complex and enigmatic of Bosch’s works –and probably the best known. Instead of grisaille, Bosch used oil to depict the subject of sin in bright colors. In a chronological sequence, Adam and Eve commit their sin in Paradise on the left panel, naked men and women are thrown into lust and carnal desires alongside large fantastical animals and over-sized fruits on the central panel, and on the left, a dark and hellish damnation with tortured figures. It surprises the precision with which Bosch outlined the figures and how he placed special attention to certain characters, such as the woman with cherries on her head, which he traced repeatedly. Despite the beauty of this triptych, the pessimistic message here is that happiness is fragile and fleeting. 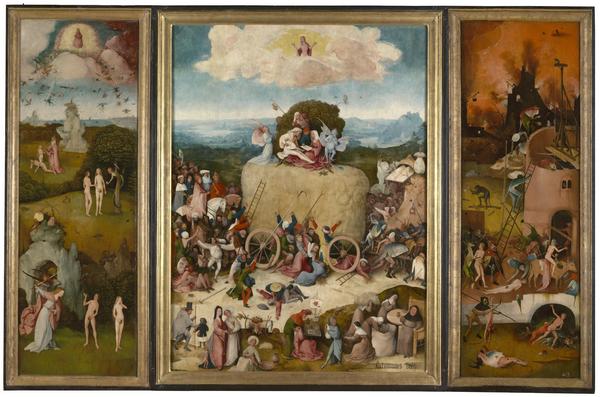 “The Haywain Triptych” is, most likely, one of Bosch’s last works. Like The Garden of Earthly Delights, it can be read from left to right and is dedicated to sin. The left panel tells the story of rebel angels being cast out of heaven, turning into insects as they break from the clouds, and of Adam and Eve being expelled from Paradise. The central panel shows humanity in various sinful acts amidst fantastical animals, leading to the right panel where Hell burns and grotesque figures make their appearance, so imaginative and emblematic of Bosch’s works. The exterior shutters convey the message of the triptych, that of the man who follows his road in spite of sinful temptations. 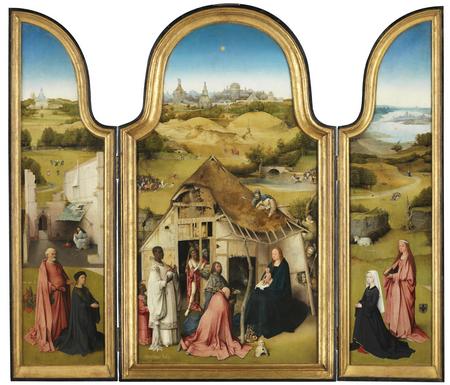 The Adoration of the Magi Triptych- Oil, on Oak Panel- 138x144cm

“The Seven Deadly Sins and the Four Last Things” is a round wooden panel that looks like the iris of an eye, with Christ in the middle and the Latin inscription “Beware, Beware, God is watching”. Around the iris are the four last things: Death of a Sinner, Judgment, Hell and Glory. Apart from depicting aspects of life during that period, the meaning of the tablet is the divine omnipresence of Christ.

It seems that Bosch wants to tell us that if we deviate from the path of God, if we renounce religion, mankind will fall into madness. And madness in that period means a stone that needs to be removed from the brain. The surgical procedure involves drilling a hole into the human skull, exposing the dura mater, as “Extracting the Stone of Madness” clearly shows. The meaning of this panel is ambiguous. It criticizes false surgeons that cheated people into believing that they could cure their “madness” but at the same time, the false surgeon extracted the bulb of a flower, which contained sexual connotations at the time. By extracting the stone of madness, the surgeon was in fact castrating the patient. 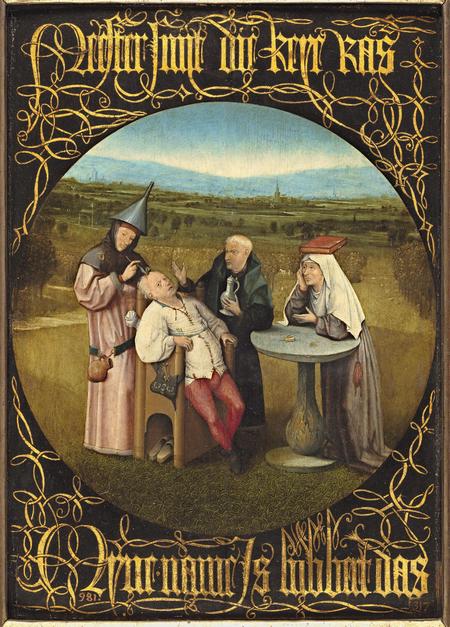 I walked out of the exhibition amazed at the details of Bosch’s work, the way the painting and triptychs ask the viewers to reflect, identify or make his own the moral of the stories he told in his particular way. I loved his delicate bodies as well as his monsters, his dark side, and it is for each of us to either reject or embrace his fundamental values; that of disregard for materialism, control of passions, moderation, understanding of oneself and rejection of the most frequent sins: anger, gluttony, and above all, lust.

The Centennial Exhibition ends in September 2016. 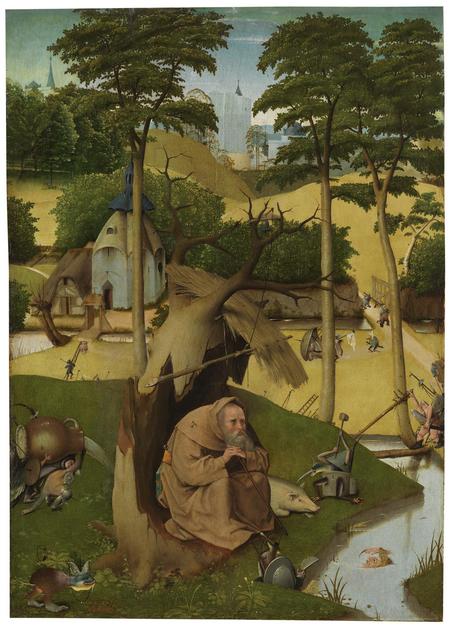 The Temptation of Saint Anthony- Oil on panel 73×52.5cm