Balance in Times of Crisis

Home/Featured/Balance in Times of Crisis
Previous Next

Balance in Times of Crisis

His work clearly calls attention, but more so it creates tension. Colombian artist Jose Olano uses everyday life spaces in the way a painter uses their canvas to make art with whatever objects he finds. He either sings to equilibrium or screams to instability.

“Balance in Times of Crisis”. Video performance of the artist siting on an armchair set high against the wall, suspended by a wooden beam.

Cartagena, March 15, 2020… He waits for me on the sidewalk of an empty street, next to a broken chair with wobbly legs. He’s up to something.

To interview Jose Olano in that instant is as timely and unsettling as to talk to an arsonist in the midst of a fire. In fact, we are in a pandemic, probably the worst moment to visit someone. However, considering his obsession of playing with instability, the timing is perfect.

“Instability”, the artist states, “has an adverse degree of extreme quietude and numb disquietude”, as he tries to climb to the top of a broken chair that rests its four legs on four uneven stones. Total unbalance! And yet, he gets to sit down, and even stands up on it like a tightrope artist. His performance is like a circus postcard. 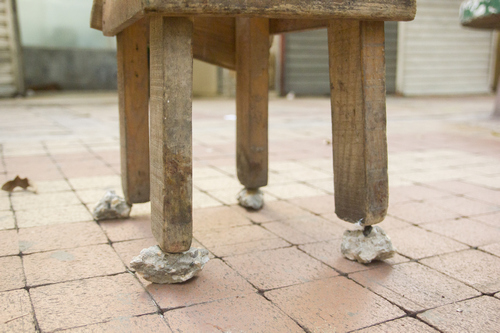 The artist finds a broken chair on the streets of Cartagena (Colombia), places stones under its wobbly legs to enhance imbalance and climbs up to the top.

In a humidity loaded heat, we sit face to face and try to focus on his work, while outside, the main topic discussed by everybody is the coming invisible storm of coronavirus and the feeling of fragility of life about to break apart. 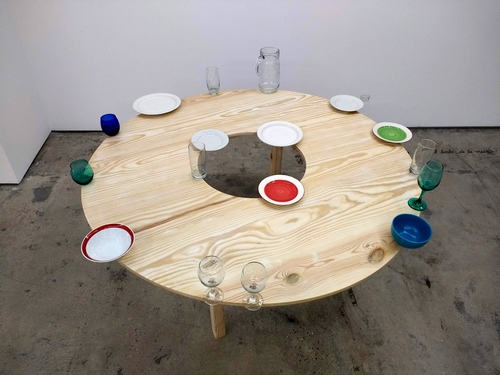 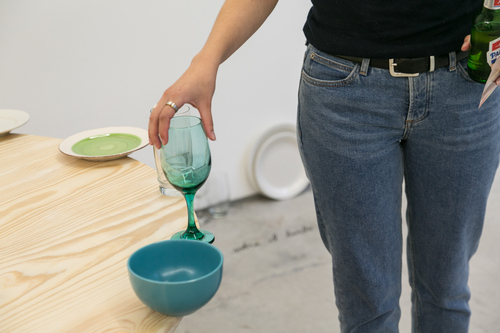 “Public Vulnerability”. An interactive work that invites the viewers to place cups and plates on the edge of a table, running the risk that they might fall and break, generating tension around the table. A provocation for people to participate in an exercise of instability.

The delirious situation in Cartagena, when it began to use facemasks as if they were catapults to throw tourists out of the city, looks like an unstable and nerve-wracking scheme concocted by the 35 years old artist. He is determined to take the viewer “out of their comfort zone, question the limits of ‘the normal’, and experiment with balance and its relationship with chance and fragility.”

During the interview, the tension of his first installation in 2009 hovers in the air. As a student of the Superior Art School in Cergy, France, he improvised with a few wooden pedestals that he had found in an exhibition room, elevated them by pushing them up against the ceiling with long wooden laths without securing them with any rope or leash, forcing the visitors to tread carefully around this unstable and ephemeral installation of inverted reality. 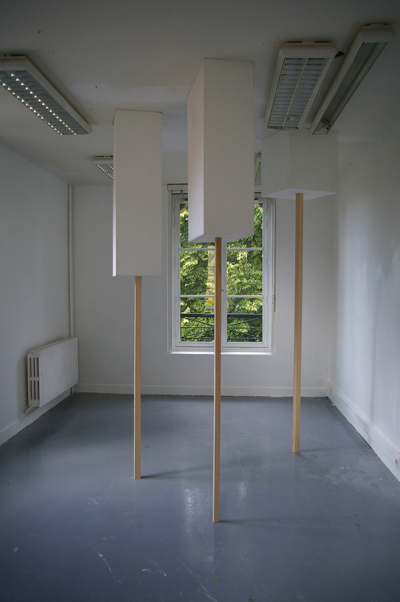 “With that first installation”, Olano says, “I felt I got somewhere”. To make art he does not need oil colors, brushes or easels. He can set aside chisels, hammers or gouges. The physical space is his support, and the daily objects about to fall apart or take flight, are the materials for his sculptures.

“I am suspicious of color, as well as frames and foundations”, he explains. “They are decorative to me. The space around me is potentially the plastic matter that at any moment I can use to register or rearrange the elements within it to create tension and a certain discourse.“ 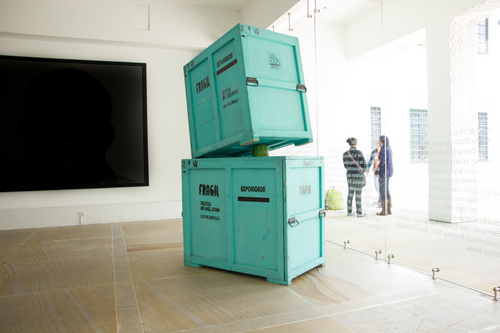 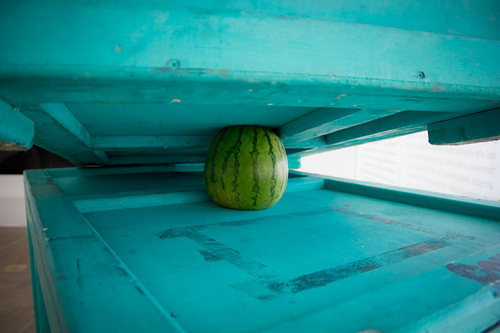 “The Concentration of Time”. In this installation, a watermelon is placed between two wooden crates and squeezed slowly by the weight of the crates, with the instruction to change the fruit every 10 days, before it explodes.

As much as Olano believes in the lethal degree of risk that pulls instability, he is also convinced that stability has its own dangers. He plays with this ambiguity in his installations.

“Equilibrium acts upon everything that surrounds us,” he concludes, “and instability is just part of that equilibrium that is hard for us to relate. We automatically fight against instability, as if it’s part of our DNA. But instability is what allows us to move; without it, there could be no evolution.” 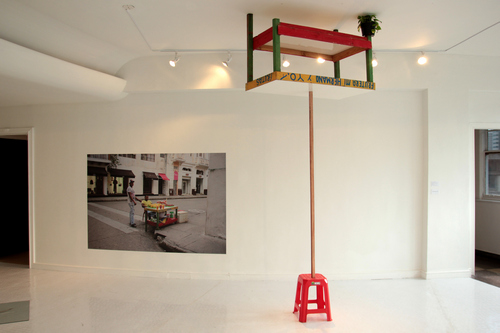 “Dream of a Corner”. The table is precariously affixed to the ceiling by pressure, against the background of a photo showing the site where the objects of the installation had been found.

Five months after we met, the pandemic locked him down, but this time under water, as his new project consists of bringing scenes of Cartagena’s daily life down to the bottom of the sea, like a nap on a hammock, a domino game, or a sausage seller wandering about the sea bed with her plate and knife.

“The challenge to defy gravity leads me to these trials under water, which is like working on the moon. The project is called Equilibrium on Tide, it is consisted of creating under water scenes with natural actors from the streets of Cartagena. The idea is to record them on video and project them within the Bastion of Santa Catalina.” 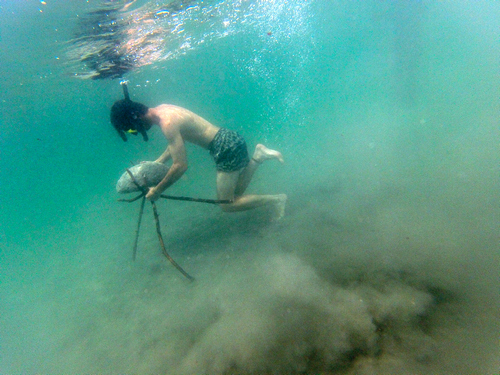 “Equilibrium on Tide”. “Working under water is something very personal; I have always lived and played by the sea.”

His creative process in his own words: “To me, art is a necessity, an urgency. Tons of things happen in my mind and suddenly a moment comes for them to want to get out at all cost. Like a vomit, an eruption, an outlet.” Olano is a creator of works on the verge of destruction; responsible for objects always desiring to jump into the void. 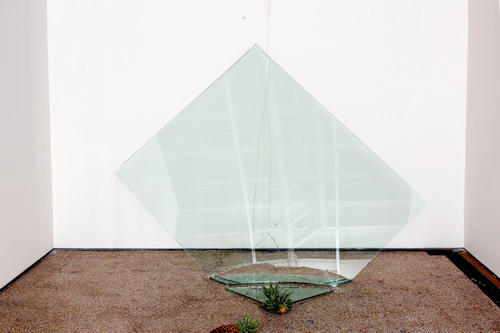 “A Trap for Chaos”. A piece of glass on top of a pineapple is an impossible feat of equilibrium that is bound to fail. The pineapple ages and the glass will break and when it does, the work is paradoxically completed. 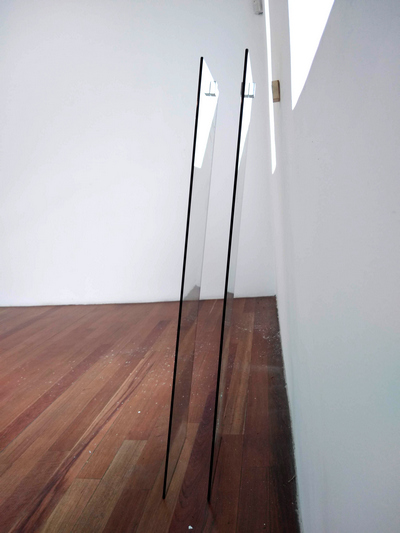 “The Resistance of The Invisible.” It appears to be two stand-alone glasses with no support but the surprising and incredulous effect is that they are held by magnets.

The artist plays, juggling with all kinds of objects that are always in suspense, always in the air, always on edge. For him, it is not important to maintain a trick hidden but to show the fantasy of equilibrium, the beauty of the unstable, the mechanisms of our fragility. His work hangs on a thread… 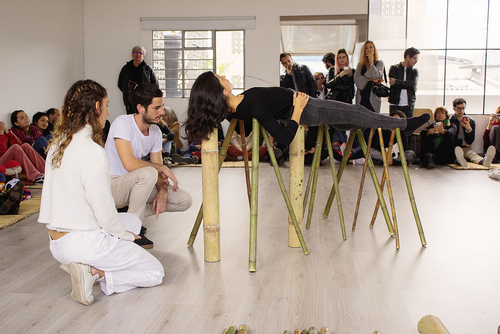 “An Encounter with the Body”. The body of a woman is held by bamboo sticks, subtle forces, in a performance that lasts from 30 to 60 minutes.

Beyond assessing the right weight, connecting antipodes, equalizing supports, creating tension between different surfaces, playing with magnets or putting ordinary elements like ballet dancers standing on their toes, his real genius is to confuse the viewers by ordering things around, inverting everything, defying the powerful force of gravity with his sculptures, installations, performances, inviting the viewer into the fearless real world of instability.