Chinese artists have been pushed from one village to another, evicted from here to there. They disperse and come together again and again.

The story of Yuan Ming Yuan Artists Village in the western part of Beijing began in the 18th century as the oldest center for the arts in China. In the early 1990s, artists arrived in large numbers from different parts of the country, because it offered a creative environment for like-minded free spirit people without requiring legal permits to live in Beijing. After it gained international attention as a hot spot for artists, authorities began to harass its residents and eventually closed it down. Evicted and displaced, artists moved on to different locations and formed various communities, most of them settled in Songzhuang.

Located on the other extreme of the city, Songzhuang blossomed from a few farmhouses on a vast empty land into another suburb filled with artists studios, galleries, restaurants, and commercial buildings. Some 6,000 to 8,000 painters, sculptors, calligraphers, photographers, filmmakers and new media artists are known to live or work there.

Walking down the roads lined by willow trees, it is easy to spot wealthier painters’ studios from the struggling ones, masters from beginners. 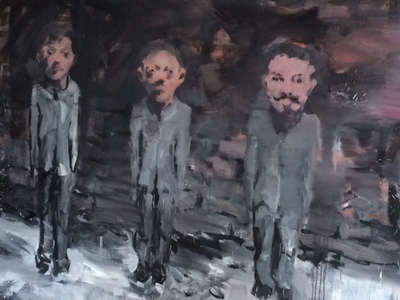 Tang Jian Ying’s studio is a modest, converted farmhouse. We are told not to approach his Tibetan dog, leashed in the backyard. Tang is in his early 50s, white short hair and a stern face, but not when he laughs. He had spent two years in prison at the age of 18 for a fight. His paintings are dark or grey. The human figures are expressionless and wear the same cloth. “These are little guys,” Tang explains, “good citizens who follow the rules but are not happy”. The lone flower that sometimes appears in the background represents dreams and aspirations because “human dignity is important”. Tang says, “We are not pigs.”

Funny enough, the next artist we visit paints primarily pigs. Li Dapeng studied in the Central Academy of Arts and went to Germany with the first badge of artists like Fang Lijun, who has gained international fame since then. Li does not paint real faces. Animals or masks are used to depict social issues and pig is just another animal, with no exceptional meaning. His pigs have included President Obama, corrupt Chinese politicians who were arrested, Wall Street criminals, rich Chinese moguls, among many others. His happy pigs are sold commercially; the political ones are too sensitive for exhibitions, and are sold to private Chinese collectors. Li’s studio is modern, ample, and bright. 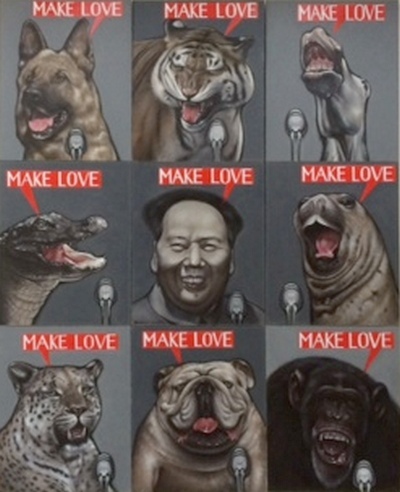 Yuan Guo Lei is from Inner Mongolia and commands himself as if he were an important individual. His studio is a huge two story modern building and appears to only hold a small percentage of his work. The first floor is piled with traditional Chinese ink paintings, detailed, restrained and crafted. The oil paintings on the second floor are lain in disarray, giving a schizophrenic sense of a world apart. They are replicas of European masters, with the single addition of a cold steel gun. “Guns represent all the important things for a man,” Yuan explains, not too convincingly, “it is a symbol of power and when you shoot, it is like ejaculation.” When asked to elaborate, he says that foreigners will never understand what Chinese have gone through in history.

To find original and interesting work is difficult in China. A visit to the studios of working artists, regardless whether they are considered successful or can barely pay their rent, is eye opening. It revels their disparity in style, technique, subject matter. Some have studied in proper universities, some have learned from the artist next door, some are just experimenting and dreaming to be an artist. Songzhuan is a good place to be for the moment, as long as its artists do not meddle with politics or social issues and are “good citizens that follow the rules but are not happy”. But I wonder for how long, or is it just like any other “big” happenings in China that are fast growing, easily grand and impressive, and yet ephemeral. Wonder if art in China is just a passing trend or is it as real as what real art is about, which survives multiple generations of uncertainty, turmoil, and realizations. 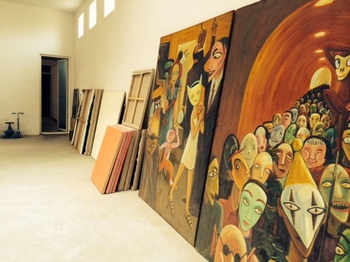 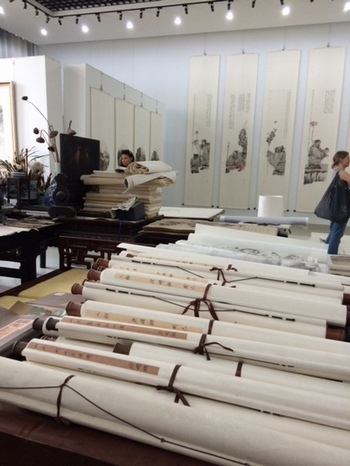